Two variants of small caliber rifle umbrellas are now selling dirt cheap at leading online retailer. Concerning the title of this post, it’s not as if we’re advocating assassination or insurgency, just that what else would rifle umbrellas be used for? Oh right, keeping you from getting soaked. And hunting for lunch. Right. 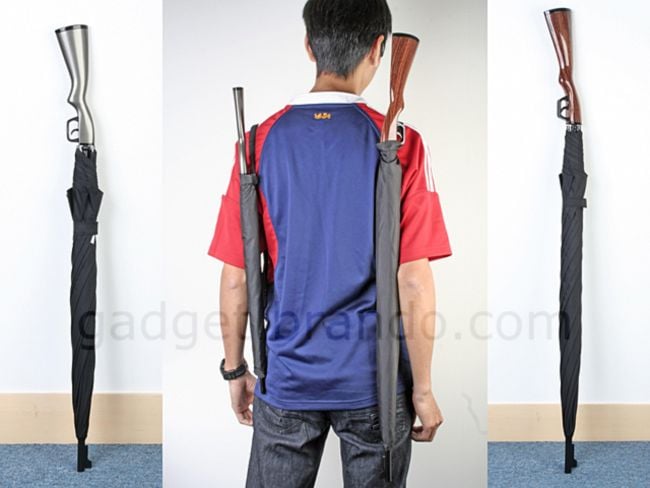 It might not be wise to use these on a rainy day however, as the soggy environment will affect the rifle’s mechanisms. As an umbrella though, it’s not too shabby, just don’t bring this to any of the following places:

Anywhere near the police

Public parks are okay. Strolling through the green with a gunbrella (not its real name) is the height of normalness. Actually personal weapons should be ck in vogue. There’s absolutely nothing wrong with the common citizenry arming themselves. If it were proper for gentlemen to carry swords in Shakespeare’s time, why not pistols and assorted firearms today?

“Are you challenging me to a duel sir-ah?” *Slaps opponent with glove

“Fine, what will it be then, swords or—”

(On a rather off topic note, has anyone seen Ridley Scott’s first movie—a certified classic-the Duellists? Powerful stuff! And Harvey Keitel is the bomb.)