Ever enjoyed a few rounds of Command and Conquer: Red Alert? The world famous RTS franchise doesn’t take itself seriously with Tesla Troopers, improbable Apocalypse tanks, and attack dogs. What you see below doesn’t belong to the Red Alert universe, but it could. It’s the work of designer Philip Pauley. 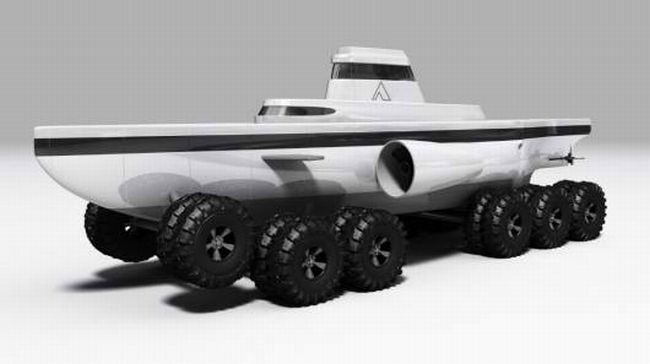 There’s this fictitious competition called the Transatlantic Seafloor Research Challenge whose avowed goal is mapping the Atlantic Ocean’s seafloor and one man has risen to the occasion. Philip Pauley thinks he has a viable submarine-vehicle design ready. We think they’re kinda daft and look best suited for an irreverent RTS game.

Anyway, here’s what it says on his official site, which has a nice gallery of the different wheeled/tracked sub designs:

“Pathfinders will be expected to maintain the average working depth for World Oceans of 4000+ meters or 2.5 miles below the surface. Pathfinders have been designed for endurance sub-sea research and exploration:- to cross the oceans floor in the quickest time, to cover the longest distance in continual contact with the ocean floor for the longest amount of time possible.

The World’s Oceans are considered one of the most unexplored frontiers and a goldmine for scientific research – and if plans to privatise the seafloor get the go ahead in the years ahead, you are going to want one of these vehicles!”

You know, he makes a good case for exploring the ocean depths. The Atlantic really is a vast unknown beneath its icy waves. However, the vehicles could find another ruse among Marine forces around the world. Don’t you think this is a perfect amphibious vessel for landing troops on beaches?