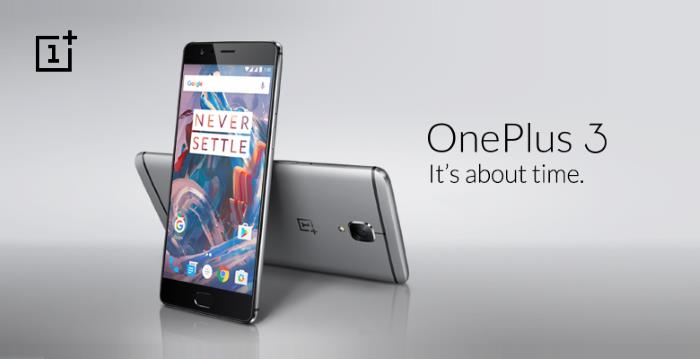 After months of leaks and rumors, OnePlus has finally released their latest flagship device, the OnePlus 3 with top-of-the-line specifications.

Best of all, the new flagship device is now available hassle-free without the need of an invite, which was the purchase system followed by the company on all its devices in the past.

Coming over to the specifications, the OnePlus 3 brings the best possible specifications to go compete with all major flagship devices from other manufacturers. The only area where the company may be a little behind compared to the rest of the lot is the display, it comes with a 5.5-inch display sporting a resolution of 1920 by 1080 pixels.

The all-new OnePlus new is powered by the Qualcomm Snapdragon 820 processor paired with a whopping 6GB of RAM on board. There’s 64GB of internal storage, 16MP camera for photos and videos with optical image stabilization, an 8MP front-facing camera, a 3,000 mAh battery and Oxygen OS based on Android 6.0 Marshmallow out of the box. There’s a fingerprint sensor on board as added security measure. One of the most interesting feature is Dash, which can provide users with over 60 percent battery in just 30 minutes.

As for the pricing, the handset is available for sale starting today directly after its launch for USD 399, EUR 399 and GBP 309.

Anyone interested in picking up the OnePlus 3 now that it’s available invite-free?