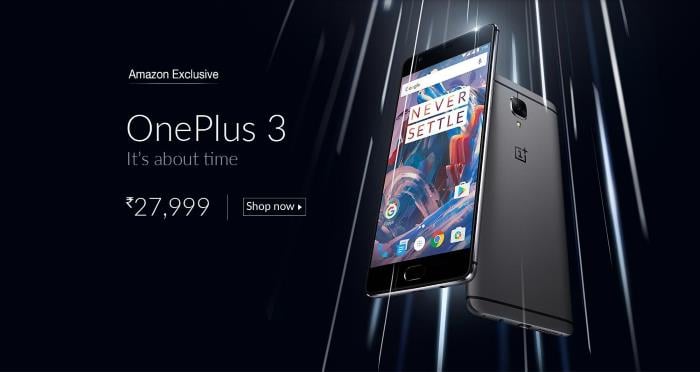 It’s been a while since OnePlus revealed their latest flagship device. The handset is set to go on sale today through the company’s website.

If you’re based in India, there’s something you should know if you want to pick up the OnePlus 3 in the country. The handset is available for sale exclusively through Amazon India for INR 27,999 which is almost $415.

The handset brings top-of-the-line specifications on board, including a 5.5-inch display sporting a resolution of 1920 by 1080 pixels with a Snapdragon 820 processor and a whopping 6GB of RAM under the hood.

There’s 64 GB of internal storage, a 16 MP camera with optical image stabilization, an 8MP front-facing camera, a fingerprint sensor as an added security measure, and ships with Android Marshmallow as its operating system. There’s a massive 3,000 mAh battery with Dash charging, which the company claims can charge over 60 percent in just 30 minutes, which is quite impressive. Unfortunately, there’s no microSD card slot on board, but I doubt you need it since the handset comes with a pretty decent 64GB of internal storage on board.

Anyone interested in picking up the OnePlus 3 now that it’s officially available? Let us know using the comments below.