The New York Police Department, commonly referred to as the NYPD, is reportedly passing out fliers in an attempt to get iPhone users to upgrade to iOS 7 as quickly as possible. The reason for this promotion, which Apple hasn’t paid for, is due to the iPhone’s new security features that supposedly make the device more difficult to steal and break into.

The iPhone now makes it possible for people to remotely secure their device, making it supposedly impossible for the device to be wiped and used again unless an Apple ID and password is used. 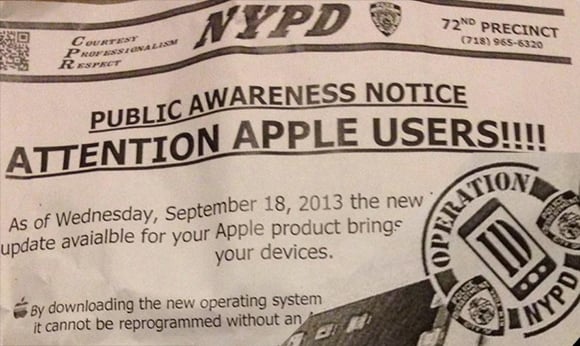 Apparently iPhone thefts have been a major problem in larger cities across the United States. The mayor of New York City even went so far as to blame Apple thefts for its most recent rise in criminal activity. Both the New York attorney general and the San Francisco district attorney have praised Apple for its latest iOS update

Did anyone notice I used the word “supposedly” twice? Hackers are always a step ahead of developers. If there isn’t a way around this new security system in the next couple of months, I’ll be shocked. That isn’t to say it won’t possibly crack down on crime, but true tech savvy individuals won’t have a problem wiping and reusing iPhones illegally for long.

What do you think about the new update?