Recently, International Data Corporation released a new report for Indian smartphone market. It now puts Nokia among the top 5 manufacturers in India with a market share of 5 percent. The top spot is captured by Samsung followed by Micromax and Kabonn to be on the second and third place, respectively.

Nokia has worked hard in the past few months to promote its Lumia branded devices, and they have been successful to some extent. Nokia Lumia 520 is one of the most popular smartphone in the Indian market as well as other emerging markets. The main reason could be the fact that the device is available in an affordable price.

The data shows that a total of 9.3 million devices shipped for the second quarter of 2013 compared to 3.5 million in the same quarter last year. The data shows that the shipments of smartphones rose by more than 50 percent on a year-to-year change. With time, the demand for the larger screen phablets and its market share rose to almost 30 percent in the second quarter of 2013. 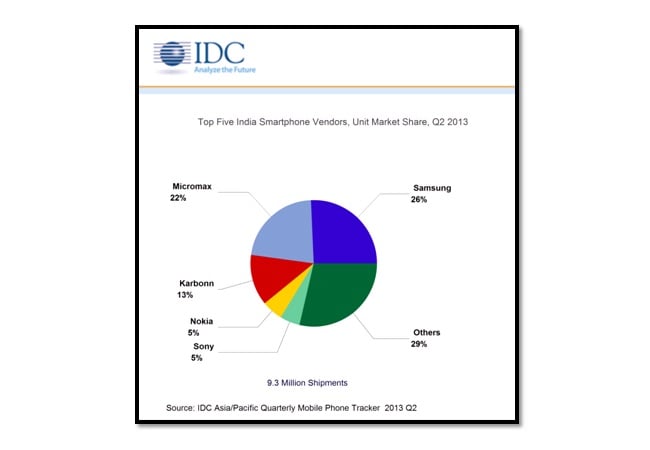 According to IDC report,

Nokia: With the company’s decision to discontinue Symbian devices, the entire focus has moved to the Lumia range of smartphones. The recently launched Lumia 520 helped Nokia pick up volumes towards the lower end. The dedicated advertising and marketing push towards positioning Lumia phones as a quicker and cooler replacement to other brands is working in its favor.

The future seems to be bright for Nokia as Lumia devices are gaining popularity. Nokia is also expected to launch a new phablet this month with larger high resolution displays, quad-core processors and latest version of the Windows Phone 8 OS. The news is not confirmed but we have seen the device in a some leaked images.