More than just an out-of the-box approach to footwear, more than just a drab fashion statement, the Repair-It-Yourself (RIY for short) is the embodiment of an idea. Eugenia Morpurgo is not alone when she expresses her wish to take control of the material world around us. What better place to begin than shoes? The RIY are a pair of canvas soles that come with a needle and thread; the whole point is to use the shoes and maintain them. Consider the whole process open rebellion against consumer culture. 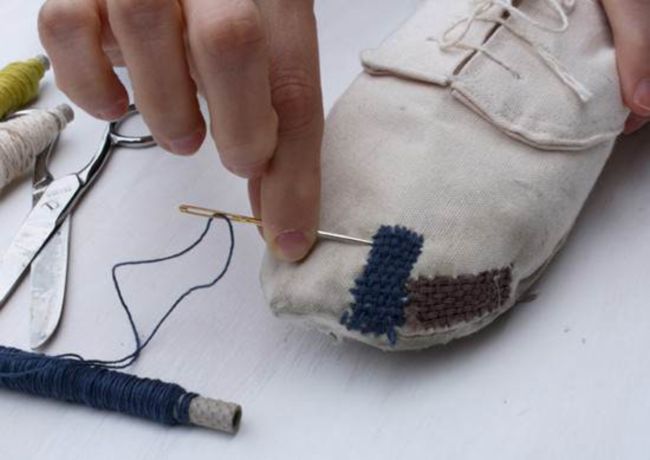 Eugenia herself explains it this way:

Shoes are one of those products that, with the rise of consumerism and mass production, evolved drastically from a completely repairable object; and the active social-economical structure that existed around shoe repair is slowly disappearing.
Shoes, both crafted and industrially manufactured, are almost always assembled through irreversible connections, stitching and/or gluing. This means that components such as the sole and the upper, although commonly made of two very different materials, are inseparable. Throughout use, shoes are worn and damaged both in the sole and in the upper.

Eugenia Morpurgo and her like minded peers can be considered part of a growing movement in the world of DIY and design. The economic turmoil that’s shaking the very foundations of the world’s biggest economies has driven home an awareness that the status quo is no longer viable. So maybe, maybe its better for the sake of a person’s life and their love of it that the values of self-sufficiency and independence are rediscovered. If it worked for previous generations, it can certainly work now.