With Dark of the Moon exploding in theatres tomorrow (are you reading this Michael Bay?) Mimoco have unleashed a special edition Mimobot Transformers USBs. Of course, rather than release an entire horde of swell-headed Autobots and Decepticons, only the respective leaders of each faction are given their due. Seen below are Optimus Prime and arch rival Megatron in their 1980s glory. 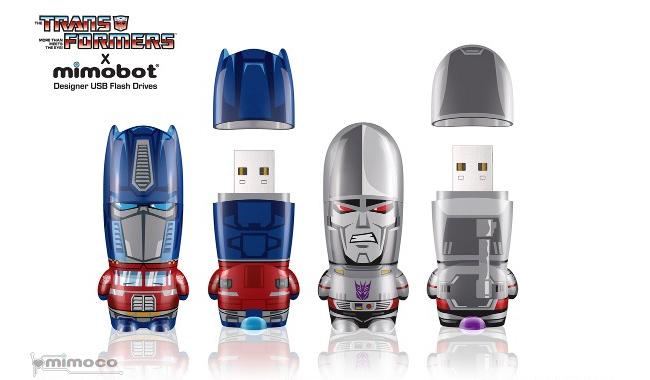 Of course, what makes these Mimobot USBs extra attractive is they’re fashioned after the classic Transformers from the TV series era. Back then, the Autobots still had a semblance of awesome and weren’t the pathetic weaklings depicted in Michael Bay’s CGI masterpiece franchise. Not to completely knock the current incarnations of Bumblebee, etc. since they still look dangerous, but the fact that they’re always whupped by awesome looking Decepticons causes diehards to cringe.

Also, how many times has Optimus Prime died, already? In the first movie he got whupped by Megatron to an inch of his cybernetic life, in the second he gets stabbed right through the chest—the third?

Call us old fashioned but during the Transformers heyday Optimus always gave Megatron a sound beating. Still, Megatron rocks—check out the classic snarl on his USB face.

Oh yes, the USBs. They’re available in both variants from 2 to 16GB versions. 2GB will cost you $23 while the heftier siblings go up to $60.