The fact that the house of Mario is relying on a string of first party franchise ports, reboots, rehashes and reimaginings to find its bearings while developers figure out exactly what 3D is good for in terms of gameplay and how to get people to stop turning it off is no longer a secret. However, there are certain franchises that Nintendo can always count on to shine and Mario Kart is definitely one. And as an added bonus, it also happens to be one of the franchises for which 3D makes the most sense. 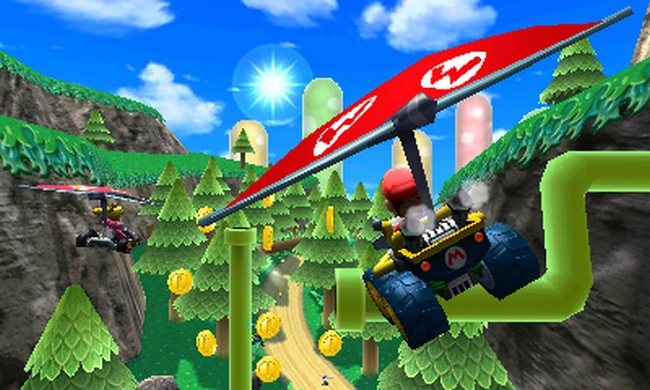 Which isn’t to say 3D is the only thing Nintendo is adding to this newest outing. This is the biggest shake-up the Mario Kart experience has had since its Gamecube days and it’s something the 3DS sorely needed. You probably remember what happened when you flew off the edge of a cliff in previous Mario Karts. An unceremonious plunge to the darkness below and an ignominious respawn. Not that plunging into the abyss isn’t usually fun and everything, but Nintendo have found something better. Your kart will now sprout a kickass hang glider and float its way down to a lower level of the track. Picture Batman’s cape glide in Arkham Asylum and you’ve got the right idea. The frosting on the cake, however, has to be seeing the arenas in full 3D from the air while gently gliding down to safety.

But wait, there’s more! Submarines! Coin boosting! Kart customization with a plethora of components that affect handling and speed! Unnecessary exclamation marks! It’s all in there and it’s all life affirming for 3DS early adopters and just general-issue Nintendo fans alike.