Hmmm, there’s something about this swanky ride that’s mighty familiar. Anyway, seen below is a new class of RV that’s supposedly best suited for the moneyed set, also known as the top 1% the world is angry at right now.
What makes the eleMMent so radical, aside form its five-star accommodations, is it’s a whole line of vehicles from Marchi Mobile. One version is basically a pimped out hotel room on wheels, another for ‘business executives’ with comfy chairs galore, and still another a showroom of sorts. 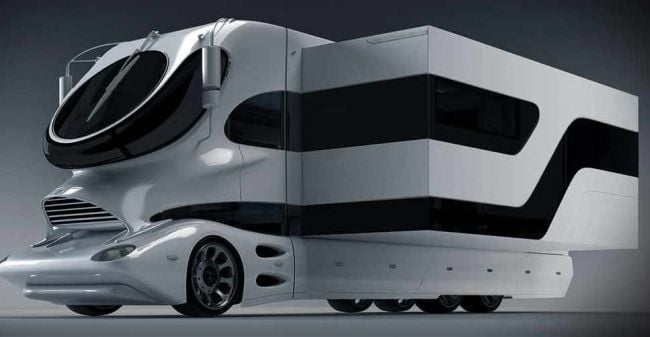 If you’re wondering about its space age exterior, especially the driver’s ‘cockpit,’ that’s because it’s based on a previous design. An extensive investigation (also known as a half-minute Google search) reveals that a concept truck by designer Luigi Colani looks exactly the same as this RV. Turns out Mr. Colani ‘consulted’ on this particular ride.
The contours-intensive appearance isn’t mere flourish either as it reduces the vehicles energy consumption. Turns out after further research (again, Google is to thank for this), the sexy curves approach to car design is an unofficial trademark for Colani. Swell guy. Would be nice to meet him someday.
This isn’t a hybrid though, as it runs on diesel. It’s also very expensive, the price tag reaching somewhere in the neighborhood of a half million dollars.
Source Gizmag