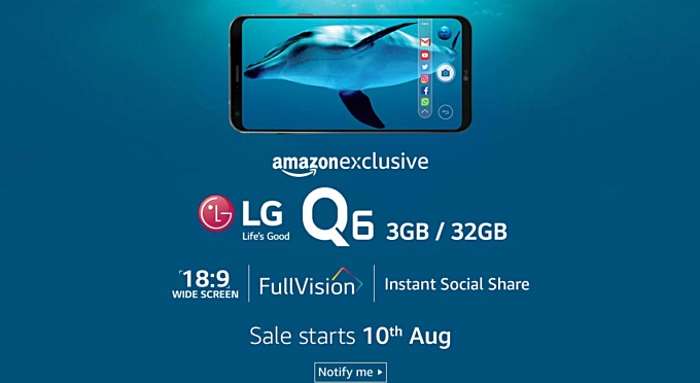 The LG Q6 was officially announced in July and until now, the handset was only available for sale in the company home country South Korea.

The all new LG Q6 is set to launch in India on August 10th, and will be exclusively available in the country through Amazon.

Unfortunately, the listing on Amazon didn’t mention the pricing of the handset, but it’s just a few days away and we’ll find out about the complete pricing details for the handset.

As for the specifications, it comes with a with a 5.5-inch display sporting a resolution of 2160 by 1080 pixels, a Snapdragon 435 processor paired with 3GB of RAM and 32GB of internal storage coupled with a microSD card slot which supports upto 256 GB of expandable storage. There’s a 13MP main camera for photos and videos, a 5MP front-facing camera, a 3,000 Mah battery and ships with Android 7.1.1 Nougat as its operating system.