September 1 to be specific. Come that date one of the largest Lego sets will go on sale. We’re talking about a 50 inch replica of the Executor, the fearsome Star Destroyer that figured so prominently in the first trilogy of the Star Wars saga. What’s really awesome about this particular Lego model is there’s a surprise waiting inside the ship. Yes, inside the ship. 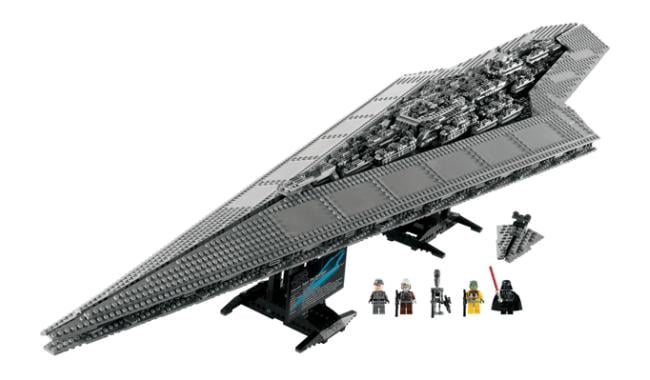 Unfortunately the surprise inside the ship isn’t a slice of bluebbery cheesecake. A small compartment in the underbelly detaches and can fit a handful of characters inside, including Darth Vader, crew members, and even a droid.

Even if it’s not a tie in for the upcoming rebooted 3D Star Wars (or is it?), the Executor set is a new benchmark for Lego, whose bricks have fired the imagination of entire generations.

The Executor retails at $400 bucks and there’s already a uz around its impending arrival. When finally buying it, it’s highly recommended the Imperial March e blasted from giant speakers for the full Galactic Empire effect.

Here’s a random question for the readers: if the Millennium Falcon and the Normandy (from Mass Effect) had to duke it out, which ship would win?

And another: Star Destroyer Executor vs. SDF1 from Robotech. Who’d win?