The title of this post might not inspire much enthusiasm, but hold on a moment. Seen below is a ultrasonic nozzle device that supposedly cleans objects better using bubbles. Don’t be confused, because while it may look like a DIY hairdryer, it really is a cutting edge gadget that could impact whole industries. The people responsible for it are Dr. Peter Berkin and Prof. Tim Leighton (the folks gazing intently at a harmless mug) from the University of Southampton. The gadget itself is called the Southampton for reasons seemingly obvious. 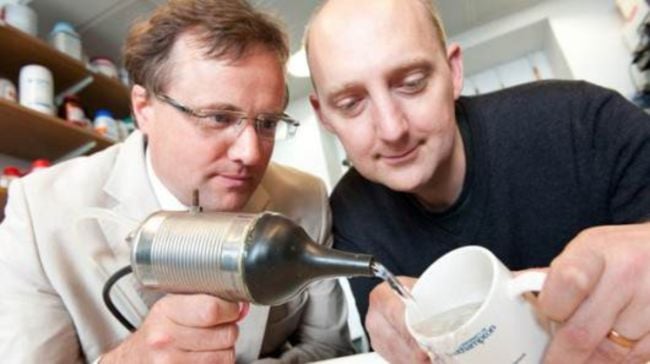 Appearance-wise, it does strike the reader as a cross between an empty wine bottle and a can of pineapple juice. It probably is, since it was assembled in a lab that was animated by a DIY ethos.

The technology involved, however, is serious stuff. When triggered, the ultrasound mentioned earlier releases a mild torrent of bubbles that inundate a particular object at the microscopic level. The exciting part is ultrasonic waves allow less water to be used on a greater scale, thus making the process water-efficient.

The idea and its current prototype seem to have made enough sense for several licensing deals, thus guaranteeing Dr. Berkin and Prof. Leighton a shot at glory everlasting.