Trust us, after you read this, you’ll be very interested about the movie. But first, let the facts be laid bare. Evan Glodell recently embarked on an indie film project with a pair of cameras he built from scratch. The first was derived from the SI-2K Mini, a digital cinema camera. The SI-2K, once stripped to its parts, was then improved with a broad assortment of add ons. Think of the scavenging/salvage of Fallout 3 to get a perfect idea of the finished product. 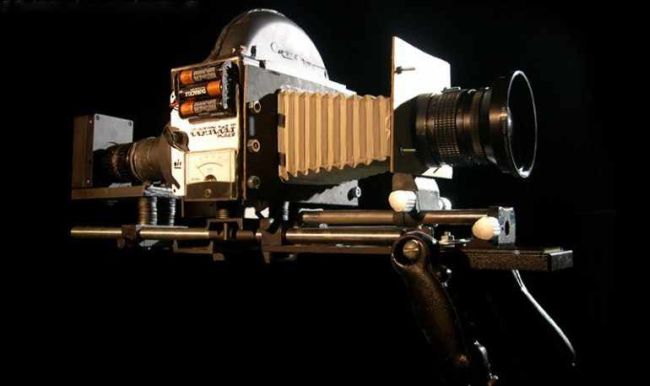 The result was the Coatwolf Model I. Not satisfied with tis specs, Glodell proceeded building the Coatwolf Model II (pictured upstairs) that was powered by a Mac, which didn’t really turn out well. While filming his tender-hearted action movie, Glodell claims the Mac had to be cooled in ice to keep it from overheating. It was a bad hardware choice.

Still, the movie “Bellflower” got made and is now doing the film festival rounds and garnering some buzz. it should be interesting for a lot of DIY enthusiasts as the inventiveness behind the Coatwolf series spills over into the plot. Watch the trailer here.

Here’s a short clip of the set where the DIY cameras are in action: