Thanks to a TV ad for the Washington Lottery that’s been making the viral rounds. In it, two chiseled knights don their steel for an epic clash. Funny thing is the dramatic build up to the surprise gag is happening in the middle of a downpour. Come to think of it, who the hell jousts while it’s raining? 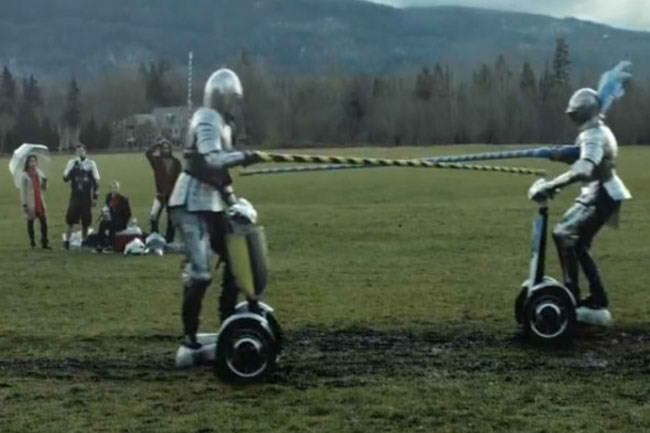 Anyway, the craptastic pic above is a screen shot of the commercial where two idiot ‘horsemen’ go at it with lances via Segways. The whole point of the advertisement is to inspire the fantasies of people who waste their hard earned cash on the Lottery. The message being if you’re sitting under a pile, why not go down the ridiculous route. If Segway Jousting does tickle your thoughts, might as well go find like minded individuals and get this non-sport off the ground. We’re certain that Segway Jousting has a large audience who miss the glory of the Middle Ages, where fair ladies made hearts flutter and knights were a landed warrior class.

According to the source of this silly tourney,

Two knights solemnly strap on their armour in preparation for a joust in this spot for Washington’s Lottery. As the contest begins, it’s revealed they’re in a muddy field on Segways with a group of friends watching.

The campaign, straplined Play Together, Win Together, aims to position the Lottery as a social experience and encourages friends to play it together to make their dreams come true.

If Segway Jousting be a sport—or at least a future sport—might as well launch the Formula 1 of Segway racing. That would be brutal.