Not too long ago, Huawei unveiled the impressive Honor 7 smartphone in China, which has received a massive 9 million pre-orders in the region.

However, if you think Huawei is done with announcing new handsets for now, think again. According to a new teaser, the Chinese company is expected to unveil the Honor 4A in China on July 21st during the Huawei Summer Whirlwind Festival which will take place between July 21st and 23rd.

It’s quite clear by looking at the teaser below that Huawei plans to launch the Honor 4A at the event which will take place at Beijing Galaxy Soho in China. Furthermore, it seems the event will also be attended by popular local artists local artists, Song Dong Ye and Peng Dan. 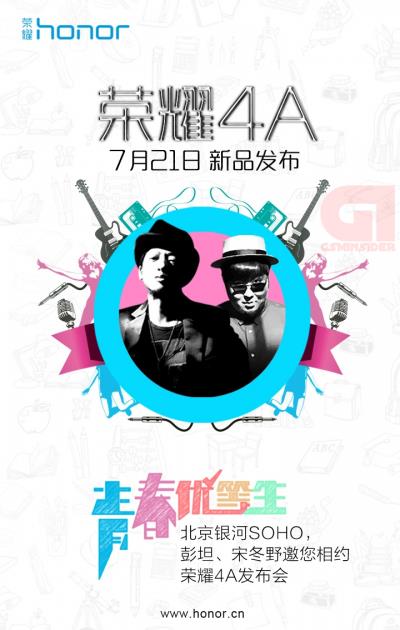 As far as the specifications are concerned, it’s expected to feature a hardware which may lie in between the Honor 4X and Honor 4C. Both these devices comes with an affordable price tag and a decent set of specifications, so we’ll just hope that Huawei will price the upcoming Honor 4A competitively as well.

Stay tuned, we’ll update you as soon as Huawei unveiles the Honor 4A smartphone.