We’ve heard a little about the Honor 6 Plus in the past few days, and it seems the company will launch the handset in the coming days, entering the phablet market with a affordable price tag.

The teaser image (as shown below) doesn’t mention anything about the Honor 6 Plus, but there are two big smartphones on the image, suggesting the company will launch a new handset on Tuesday. 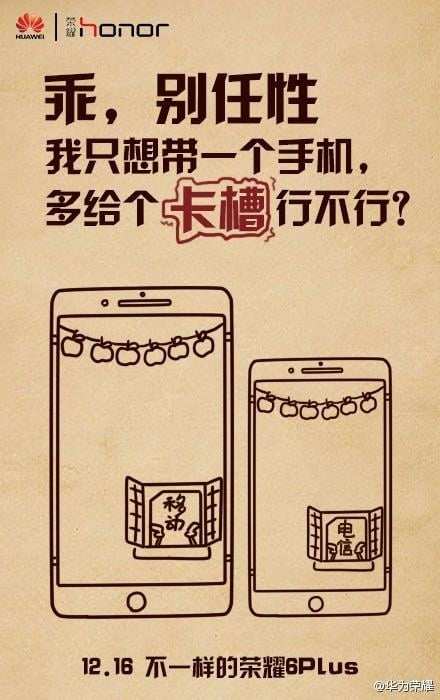 As far as the specifications are concerned, the handset is expected to feature a 5.5-inch display sporting a resolution of 1920 by 1080 pixels, and will be powered by the company’s own octa-core Kirin 925 processor paired with 3GB of RAM and a massive 3,500 mAh battery to make sure you never run out of juice at important times.

Rumors suggest the handset will carry a 1,999 yuan price tag (almost $323) which is an extremely attractive price if you consider what the handset has to offer to its users.

Stay tuned, we’ll update you as soon as we hear anything more about the alleged handset.