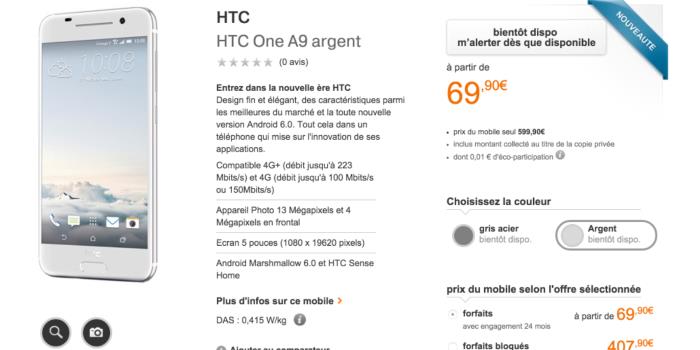 HTC One A9 can very well claim the title of one of the most leaked handsets this year. We’ve heard almost everything we need to know about the upcoming mid-range device from the Taiwanese company, be it the press renders or the specifications.

Now, to add more to the leaks, it seems a French carrier, Orange, has accidentally leaked the HTC One A9. The carrier has a product page for the handset showing how it may look like as well as its price tag.

Previous rumors suggest that the alleged HTC One A9 will be powered by a Qualcomm Snapdragon 617 processor paired with 2GB of RAM and 16GB of internal storage. There will be a microSD card slot for users looking for expansion. Other rumored features include 4G LTE connectivity, 13MP main camera for photos and videos, 4MP UltraPixel camera, a 2150 mAh battery and may ship with Android 6.0 Marshmallow as its operating system.

The handset is not officially announced, but the Taiwanese company has scheduled an event on October 20th where the company is expected to launch the highly rumored handset. We’ll update you as soon as we get to hear anything more about the device.