A certain computer science professor named Baudisch and his team are currently hard at work creating an invisible smartphone system. Foreseeing upcoming trends in touch sensitive devices, Baudisch believes there will come a time when small gestures on the palm of one’s hand replaces our already miniaturized smartphone app-centric computing. To accomplish this next step, however, takes a lot of work, thus explaining the experimental photo’s below involving a pocket-bound iPhone and human hands. 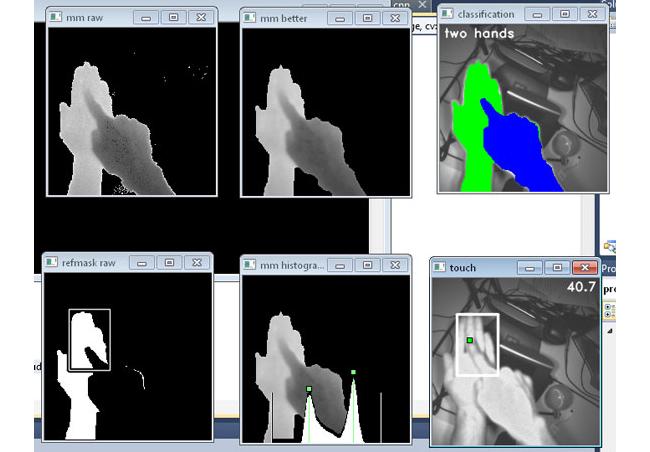 Currently being assembled in the Hasso Plattner Institute in Germany, Professor Baudisch and colleagues are using a motion capture camera and connectivity to translate hand gestures into smartphone functions. The value of such features is people who might be too busy processing information in their daily work no longer have to pull out their smartphone to access app and receive emails. It can all be done with flicks of the fingers and slight manipulations.

For the current project, the researchers used a depth camera similar to the one used in Microsoft’s Kinect for Xbox, but bulkier and positioned on a tripod. (Ultimately, a smaller, wearable depth camera could be used.) The camera “subtracts” the background and tracks the finger position on the palm. It works well in various lighting conditions, including direct sunlight. Software interprets finger positions and movements and correlates it to the position of icons on a person’s iPhone. A Wi-Fi radio transmits these movements to the phone.

Of course, it will be a while before Professor Blaudisch presents a commercially viable variant of his current project.