Ever since this scientific breakthrough started circulating, it’s been Terminator this Terminator that, as if SkyNet was just a few Arnold Schwarzenegger’s closer to world domination. Pictured below isn’t a rather unappetizing example of fusion cuisine; it’s artificially grown tissue for surgical purposes. And nope, it won’t be applied to metallic exoskeletons for covert purposes, i.e. assassinating John Connor. 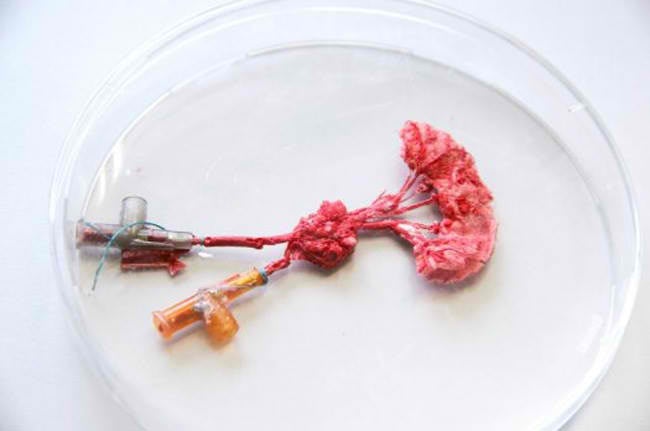 Thanks to advanced robotics and the kind of ingenuity only Germans have in abundance, spare tissue and blood vessels will soon be available for medical purposes. Here’s a good chunk of hearty text:

The pieces of tissue swimming in their nutrient solution may look less than impressive, but the pilot project here is about more than just manufacturing skin. The process is meant to pave the way for a new era, one in which human tissue becomes an industrial product. The miracle of incarnation, which once only took place in the darkness of the uterus, is now happening under the cold neon light of an assembly facility controlled by robots.

This means that Heike Walles, the 48-year-old head of the institute’s Cell and Tissue Engineering department, has finally reached her goal. A biochemist, Welles has dedicated her entire career to culturing tissue. One image that especially fueled her interest in this futuristic field was the famous photograph from the Vacanti laboratory at Harvard University. There, 15 years ago, brothers Jay and Chuck Vacanti created an ear-shaped cartilage structure and grafted it onto the back of a mouse.