History was made in Whitmann Regional Airport, Wisconsin, earlier this month. Of course the kind of history made may never enter the books, but it still deserves to be written about because of the airplane involved. On gray December morning (December 3 to be specific) a yellow N270DC Waiex kit aircraft took off for a test flight on an electric motor. 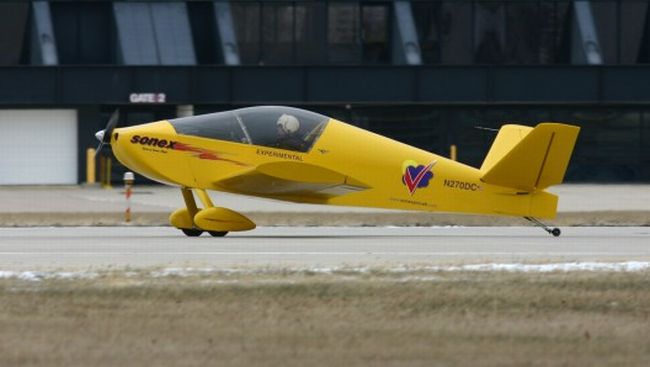 Sonex Aircraft’s latest work-in-progress ran an E-Flight 54 KW brushless DC electric motor, a corresponding E-flight motor controller, 14.5 KWh lithium polymer battery system and its owns et of E-flight cockpit control systems. The December 3 maiden flight it undertook is actually just the first in a series of tests expected to run until 2011. The significance of this breakthrough is kit prop-driven planes that run on electric motors may soon capture a large chunk of the market. After all, even if they aren’t electric powered, propeller planes consume a moderate amount of fuel compared to a snazzy corporate jet.

Sonex Aircraft’s John Monnet had this to say: “Every first flight of a new aircraft or power plant design is an interesting experience. But with N270DC more than any other aircraft we’ve built, I experienced just a glimpse of what the Wright Brothers must have felt like flying an unproven system for the first time. The flight was uneventful, as expected, but it represents a huge emotional victory for our team to check this item off the list.”