Of course, like all amateurish videos taken of alien “evidence” this one’s a stinking fake. How come? The awfully bad Russian accents of the uhm, “witnesses.” This was probably shot in Canada, harhar. The less than two minute video clip has gone viral since it was uploaded on Youtube last Sunday, having garnered 4 million views to date. In it, a couple of mumbling Russians inspect a corpse they found in the snow. For an alien find, the corpse is pitifully shrunken and hardly decomposed–considering it was allegedly left out in the frigid weather for a couple of days or more. 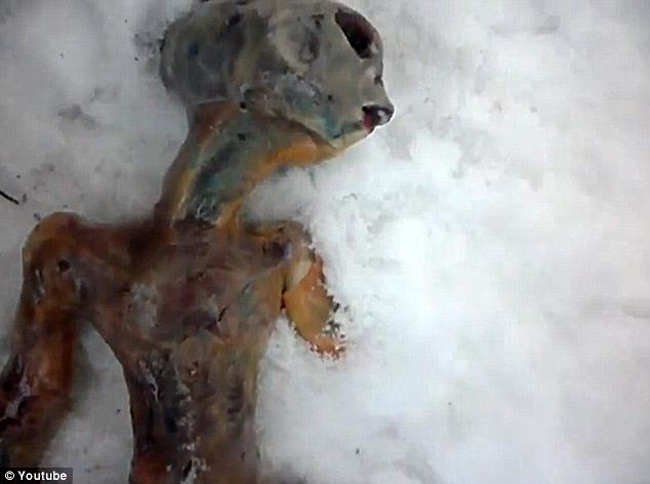 Here’s what it says on the description below the Youtube vid:

Around one month ago this publication reported on a major UFO event that occurred in the region of Irkutsk in Russia’s Siberia. Hundreds of villagers saw a huge object, glowing pink and blue, hurtle towards Earth before loudly impacting the ground in a wooded area . The event received widespread coverage in Russia and was reported by Inter-fax, Russia’s government news agency. In the West the event was completely ignored if not deliberately kept from public view.
An enormous team of government officials, including military personal [sic], secret service agents and science ministry officials made their was to the UFO crash site within hours of the event occurring.
Now it seems a video has been leaked onto the Internet showing a dead Alien, found in the Republic of Buryatia, not far from the site of the UFO crash. Is the alien seen in this video a survivor of that crash who managed to leave the area only to die as a result of Russia’s harsh conditions?

Okay, having wasted your time, on to the next (and more substantial) post.