Especially when you’re at the receiving end of this diabolical weapon. Make that toy weapon as it’s completely non lethal. (Unless you club someone on the head with it.) Made by a certain PenfoldPlant whose creative streak is more in line with Hiram Maxim than Thomas Edison, the Tar and Feather is a single shot projectile launcher that’ loaded with gross things, i.e. tar and feathers. 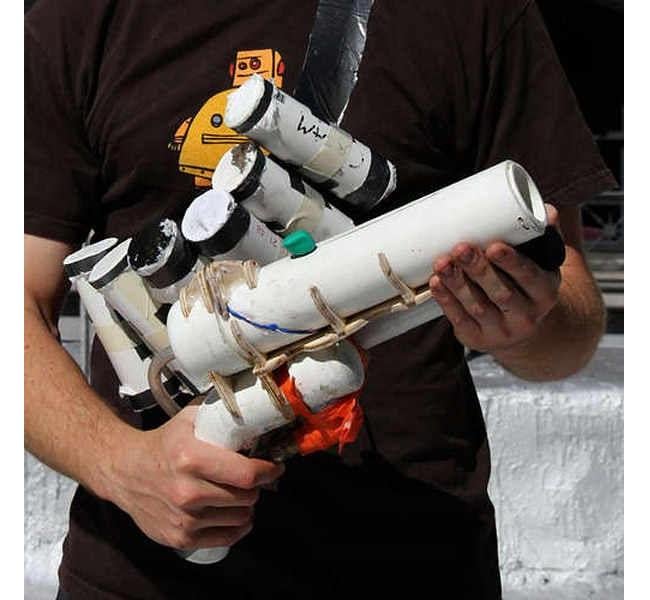 While the historic tar and feathering process was a far more dangerous practice often involving a citizen mob, this latest incarnation is for fun and games. (Until it’s used for civil disturbance.) If the picture above strikes you as less than impressive, why, it is less than impressive.
You’re looking at a set of PVC pipes stuck together and a crude firing mechanism. the cartridges themselves are woefully short range but have the capacity to store different kinds of, uh, ordnance other than tar and feathers. As the resulting ‘damage’ on an unfortunate target–it actually gets the job done.But make sure they’re close and unsuspecting.
We believe the tar and feather is an ideal candidate for serious modding and a secret weapon for Nerf fan boys. When the mock firefights reach a new level, it would be most opportune to pull out this baby and ruin someone’s day. Imagine if you fired a cartridge of the juice in a sardine can. That’s really awful.
Incredibly detailed instructions are available via the source link below.
Source Instructables