All it takes is a snap of the rubber string, the machete dislodged from its place, and a casualty. After that it’s “Look ma, no hand!”

Seriously now, pictured below is a sling shot rifle the length of a musket that launches a machete. Yeah, we know—what the heck, right?

If the pictorial evidence is  a bit too grainy, forgive us, because twas lifted from an instructional vid where the jacketed man killed an innocent piece of cardboard to prove how deadly his creation is. He also cuts himself in the arm loading it, so kids, don’t try this at home. 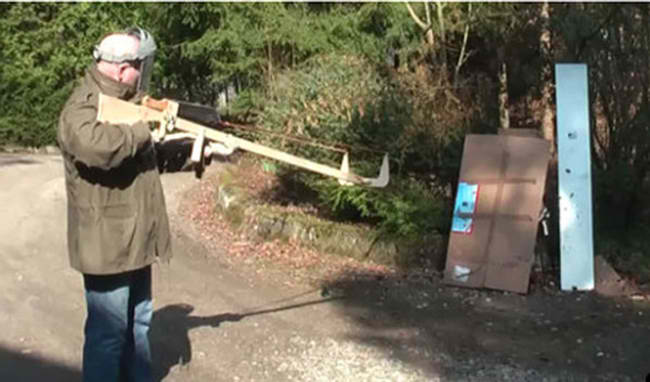 Of course, the cleverness and craftsmanship aside (woodworking always earns our respect), the machete slingshot isn’t that great a weapon for various reasons. The loading is awkward, the range isn’t great, and worse, simply throwing a machete at a target can fetch more accurate results.

It’s not all bad though. The machete slingshot is a silent weapon and we’re thinking Special Forces from around the world might e interested in using this on their super top secret missions. Them, and Libyan rebels who badly need new weaponry.

Now if only the same guy who made this can build a machinegun version. That would be much deadlier to unsuspecting cardboard.