Michael Bay must be chucking to himself right now after reading this. You know what the prototype is called? The TX, short for Transformer. It’s supposed to debut in the rugged landscape of Afghanistan and give U.S. troops over there the airborne edge. 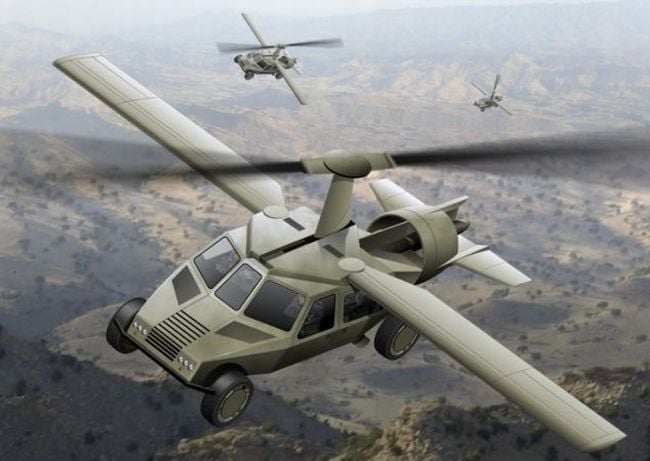 We say: Whatever. This multimillion dollar DARPA initiative is supposed to solve the ground troops’ problems in Afghanistan when it finally rolls out. (If it ever rolls out.) Its capabilities are self-evident. It’s a rugged 4×4 like a Humvee, which is woefully inadequate against roadside bombs, but can deploy rotors and take off to avoid ambushes and insert/extract troops faster.

According to the source article U.S. commanders are optimistic about this new vehicle, which is 20 feet long and can be equipped with armaments. What we find worrying is DARPA seems to be making a vehicle that will actually underperform in the field for several reasons.

First, most helicopters are lightly armored, meaning they aren’t impervious to ground fire or rockets or missiles. Ditto 4×4 vehicles. The problem is this TX must be compact enough to lift off but must pack enough armor for protection, itself quite an impossible balance to achieve.

Second, the Afghan conflict isn’t about who has the most high tech  weapons like super-precise grenade launchers, etc. There’s a complex political dimension to the asymmetrical warfare going on over there.

So maybe this design is better off a concept rather than a real vehicle.