The concept and technology is at least a decade old, but it may finally hit the road once all the kinks are smoothed out in the next two years of testing. Oh, and what’s it called? SARTRE. The long version is “Safe Road Trains For the Environment.” 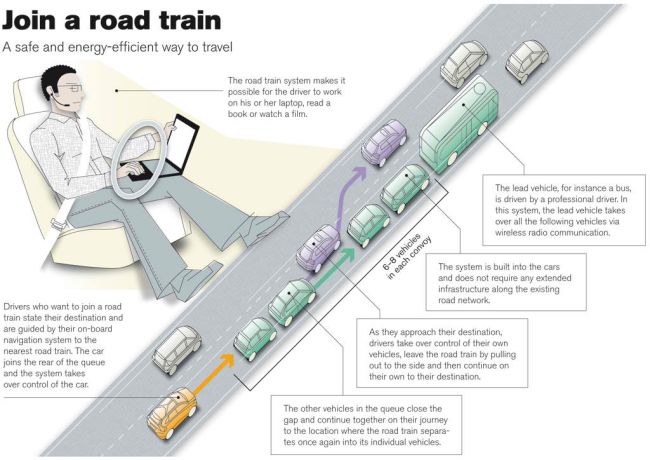 SARTRE is pretty straightforward. Instead of driving all by yourself in a highway, you coordinate with other cars to form a convoy then surrender control of your vehicle. This is something along the lines of that crazy chase sequence from Minority report minus Tom Cruise jumping around. More than just a lazy solution to the dull chore of driving to work, SARTRE is a model of efficiency. When everyone’s in a convoy there are no accidents, traffic is manageable, and you can play games on your iPad for the duration of the trip.

Alas, SARTRE has to jump though a few high hoops before it’s road ready. It’s biggest hurdle is to perfect the “lead vehicle” system where a closely monitored professional driver guides the convoy across a specific distance. A two car test is going to be held before the year is out followed by  five car sequel come 2011.

If all goes well, the autobahn would be a lot less crazy in the next five years.