iPhone cases that can be used to open bottles is nothing new. But Be A Headcase take it further with an app that counts how many the user has opened over a period of time. Is this even possible? Well, read on. 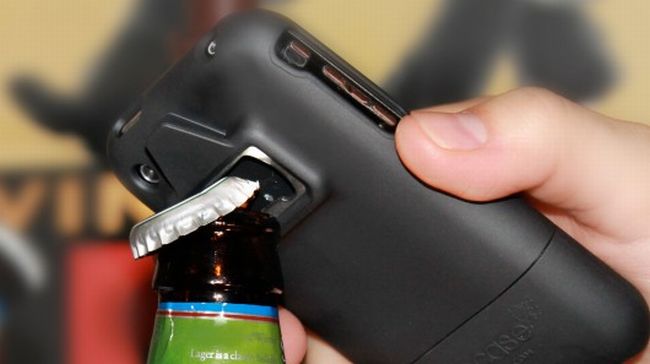 What you see pictured above is the case in action. That’s a rubberized outer coating around a stainless steel opener. Each time it’s used to sate the beer thirst of those around you (and yourself), the app’s counter gets a-workin’.

Even cooler than an iced cold bottle are the app’s extra features. Using the accelerometer, the app displays an image and plays an accompanying tune each time the Be A Headcase attacks a bottle cap. Keep in mind the song and picture displayed are the user’s choice, so the app is not only a hard worker but fully customizable as well.

Despite fears that foaming bottles might soak the iPhone and its case, so far there’ve been no reports to substantiate these. The Be A Headcase is only available in two colors at the moment: black and pink. The prices vary from $19.99 to $24.99.

Update: Pictures have also surfaced of the Be A Headcase applied to aluminum cans. So not only does it start parties, but prepares your favorite soda for consumption.