Samsung’s enormous phablet – Galaxy Mega 6.3 – is already available in various parts of the world and it now seems that it will also make its way to the US market very soon. The press render of Samsung Galaxy Mega 6.3 surfaces on the internet, thanks to the notorious Twitter leaker Evleaks. We have all the reasons to believe that its coming to AT&T as evleaks has leaked accurate information in the past with Moto X and LG G2 being one of them. The press render shows AT&T logo on the rear panel of the device. 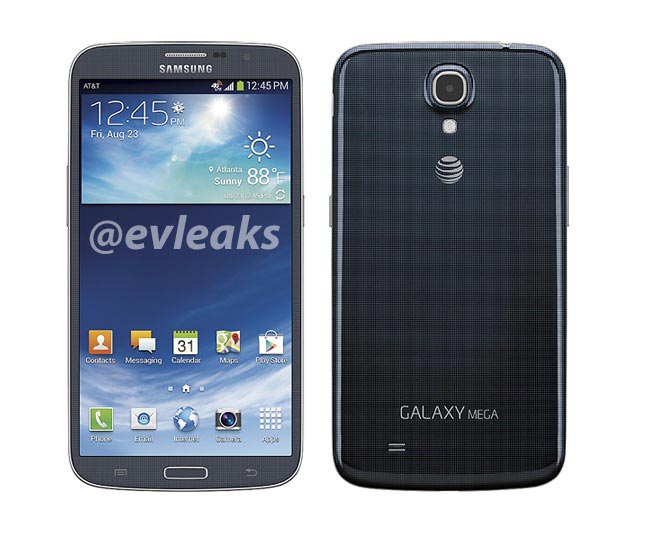 The device packs mid-range specifications featuring a massive 6.3 inch display boasting a resolution of 768 x 1280 pixels with 233 ppi, dual-core Snapdragon 400 processor clocked at 1.7GHZ with 1.5GB RAM, 8/16GB internal storage with a microSD card slot that supports storage up to 64GB, 8MP rear camera and 1.9MP front camera. The device is powered by 3200 mAh battery and runs Android 4.2.2 Jelly Bean on top of it.

There is no indication on when the device will hit AT&T but I think it will hit the shelves in the coming weeks. From past experiences, we know that @evleaks posts leaked renders of device that are about to be released. We also don’t have any information regarding the pricing of the device but we do hope that it will cater the mid-range market needs and will be available at a competitive price.

There is no official announcement from AT&T regarding the launch of Galaxy Mega 6.3 but I think we will hear an official  word very soon. Stay tuned and we will share with you any information we can get about Galaxy Mega 6.3 availability on AT&T.