It wouldn’t be a stretch to declare this brownie colored wonder pillow the Holy Grail of couch potatoes across the globe. Too bad you can’t eat it and change channels at the same time. 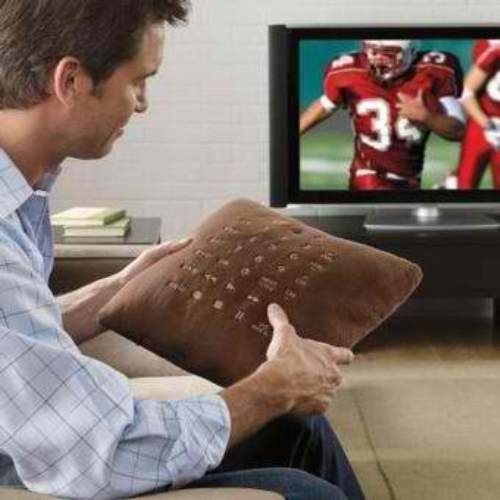 For just $30 bucks you can sink your paws onto this universal remote pillow. What’s even cooler is the remote buttons are idiot proof. Just have a close look at the picture above. Easy, right?

However, we do foresee problems when this is in use. First is how much hardcore ruggedness can it take? We mean, look it’s a pillow. People will lie on it, shove it up their armpits (it sucks to be a pillow sometimes), sit on it and go ‘where’s the remote?’ while the channels on the telly are randomly changing. Being a pillow remote, it must withstand the rigors both pillows and remotes have, so that’s double the damage it must be able to resist. Or could it?

We’d also like to know if it changes channels when you lie down on it. Honestly, this is a valid point. When your head rests on its surface, won’t the buttons be activated?

At least when this slips from your hands in a fit of passion during a football game it doesn’t crash into the TV screen, thereby destroying it and delivering you to a world of woe. Aren’t there enough epic fail pictures of this type of accident already?