Call it one of the worst submersibles ever made. Probably next to the “salt water enterprise” built in the late 19th century by an Irishman to sink a British warship. As shown in the picture, the Aqua Star USA AS2 is an underwater scooter that can seat two. Sure, the idea is novel. The vehicle, on the other hand, looks like an accident waiting to happen. 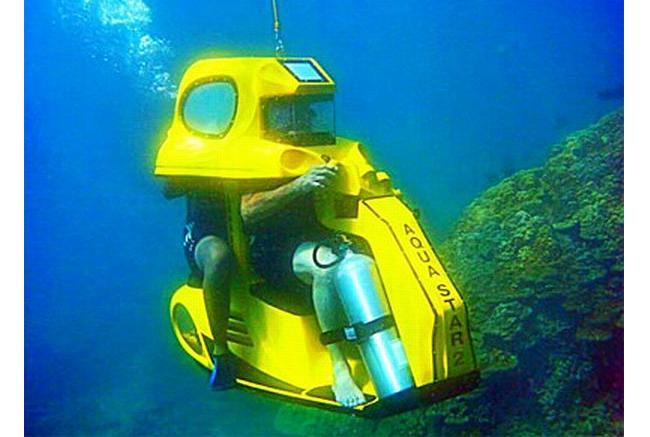 Aside from the horrible ergonomics (the performance specs are pretty solid though), the Aqua Star has questionable features like the fixed helmet. Though the fixed helmet does supply more than an hour of oxygen, it’s still a better idea to wear a mask and breathe from a tank. It also appears too cumbersome for a vehicle that will maneuver around coral reefs and rocks. Why not swim instead?

The Aqua Star AS2 is powered by an electric power cell and can move at a relatively decent speed underwater. The battery lasts 2.5 hours and the vehicle operates well at down to 12 meters deep.

The company behind this submersible scooter have a minisub in the works due sometime this year. Based on the concept they teased, the new one looks more promising. If it were up to us though, go 100% scuba. Or beter yet, work them swimming muscles and do what pearl divers have for centuries—just one big gulp of air and that’s it, go as deep as you can.The experience is more visceral that way.