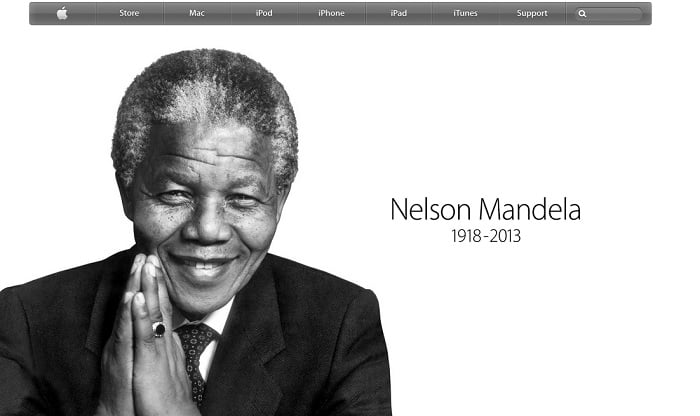 Apple’s remembrance of this iconic figure is not new as he also appeared in Apple’s Think Different ad campaign. Apple CEO Tim Cook posted a couple of tweets to honor Nelson Mandela and mentioned in a tweet, “Amazing human being. Champion of freedom and human dignity. He set an example for all of the world. RIP Nelson Mandela. We miss you already.” In another tweet, he posted one of the quotes of Nelson Mandela.

It’s not just Tim Cook, Apple’s SVP Phil Schiller also tweeted one of the quotes of this great man, “Let freedom reign. The sun never set on so glorious a human achievement.” His Excellancy Nelson Mandela, 1918 – 2013.

It’s not just Mandela, Apple paid tributes to several other figures in the past including it’s ex-CEO Steve Jobs as well as few other personalities, including Gregory Hines, George Harrison, Rosa Parks and board member Jerry York