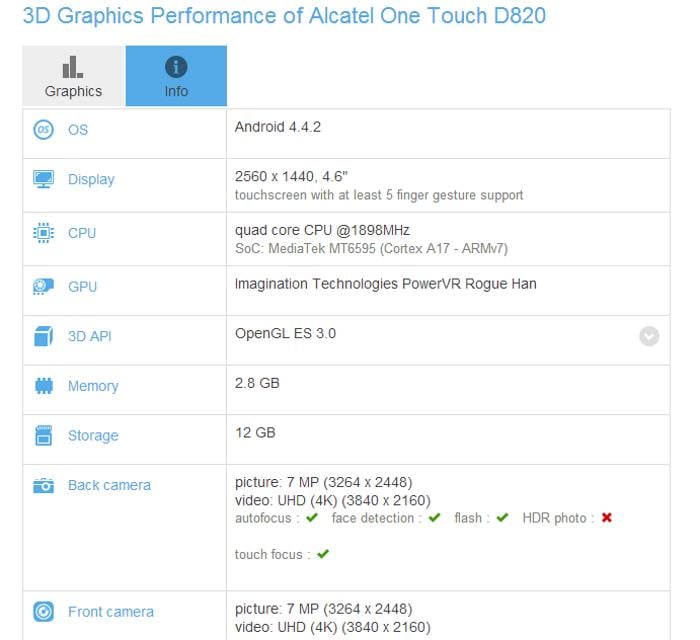 Not too long ago, MediaTek announced its 64-bit octa-core MT6795 processor clocked at up to 2.2GHz and comes with support for 2K displays and LTE.

Recently, a mysterious Alcatel handset was spotted on the GFXBench website, detailing some killer specifications it will come with.

Alcatel has been selling, known as TCL in China, has been selling devices in many global markets, including Europe and the US. But, mostly, the OEM is popular for making low-end budget Android devices. But, things may change soon as the OEM may have a high-end device in the pipeline, powered by the new MediaTek MT6795 octa-core processor.

The GFXBench listing also reveal most of the specifications of the alleged device, dubbed as Alcatel One Touch D820. According to the listing, the device will come with a 4.6-inch display sporting a resolution of 2560 x 1440 pixels, as well as the 3GB of RAM and 16GB of storage on board.

The only disappointment may be the 7MP back camera, but it comes with 4K video recording capabilities. There’s a 7MP front-facing camera too, along with Android 4.4.2 KitKat as its operating system. It could be the same device spotted a few days back on AnTuTu which scored 47,000 points on AnTuTu.

There’s no official confirmation, but if its real, it could be a very decent device. We’ll update you as soon as it’s officially announced.