Whoever named it The Ultimate Game Chair must either be a marketing genius or a very cheeky fellow. Equal parts Darth Vader and Stealth fighter cockpit, the glorified couch comes packed with enough hardware to make James Bond salivate. 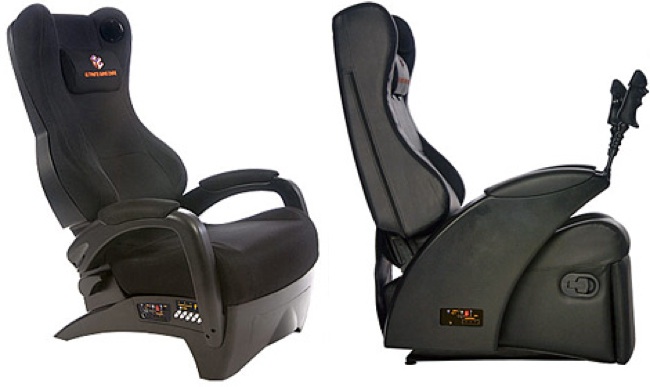 Of course, it doesn’t fire rockets but its leather clad frame is embedded with 12 different vibrating motor for those extra realistic sensations, a set of speakers, adjustable head/arm rests, holders for drinks and remote controls, plus it can accomodate whatever gaming controller you need. The fabric is also stain-resistant so you don’t need to worry about messing it up if you snack while gaming.

To further ice the cake, The Ultimate Game Chair is compatible with all consoles. The Raptor seen above at the left is $299 while the Ultimate Game Chair model sports additional joysticks at right goes for $399. If you want to rock your gaming bum, head on over to the site and pre-order. These will be shipping later this month.