The highly rumored Nokia X saw the light of the day at the Mobile World Congress 2014 in Barcelona yesterday. The handset is running on Android Open Source Project (AOSP) with Nokia’s services on top of it.

The handset doesn’t have access to Google Play Store, or any other Google service for the fact, but users can sideload apps, and can search for apps in Nokia’s own store. At the event, Nokia mentioned Google Play store apps can be ported to the Nokia X platform in less than eight hours. Nokia has mentioned on their developer page that 75 percent of Android apps are compatible with the Nokia X, leaving 25 percent which needs work. 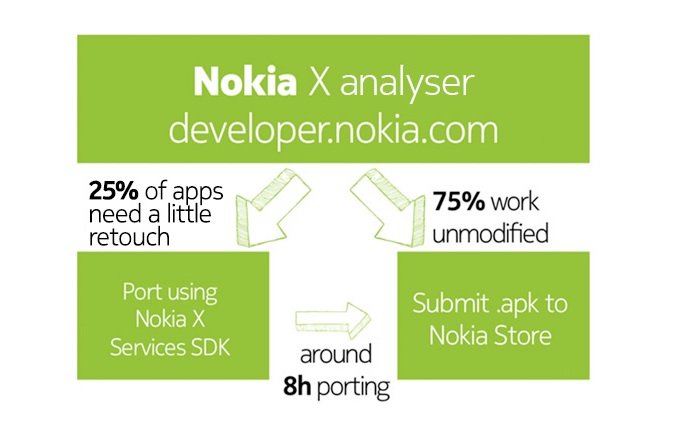 The remaining 25 percent can easily be ported in less than eight hours using the Nokia X Services SDK, even if they are using Google services. Developers can even use the app compatibility analyzer to see if the app can be ported or needs work. This should come as a good news for potential Nokia X buyers, but is it a good news for Microsoft?

The thing is, it could turn out to be beneficial for Microsoft as the handset has nothing to do with Google services, and is running on Microsoft’s services on top of it. Plus, anyone who has never used Android before will not even realise he’s using an Android device, due to the tile-based launcher and customization Nokia has given to the software.

What do you think? Can Nokia X turn out to be good? Will we see more handsets from the company based on the AOSP?