We don’t keep score here at Geeky Gadgets. I mean we do on Bejeweled Blitz, but not when it comes to game genres or walks of industry games come in or from. What we really care about is old school fun and innovation, funnovation if you will. Also horrible, horrible word games.  The indie frolic with the megapublisher and the first person shooter lies down with the experimental tower defense mech combat game. Which tower defense mech combat game I hear you ask? Is there even such a thing? 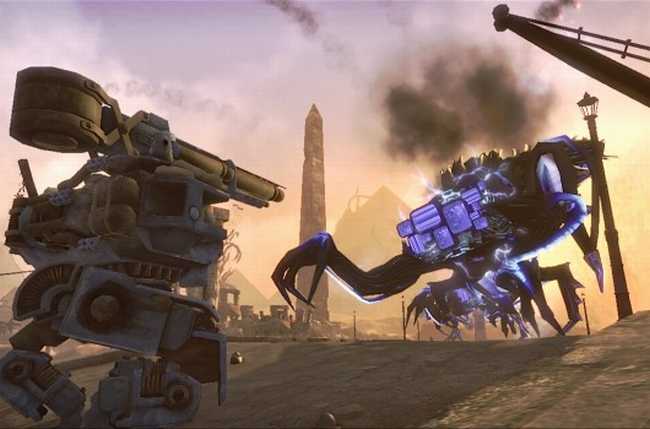 I’m pretty sure that when celebrated industry legend Tim Schafer gave free rein of development resources to his designers and presumably told them something along the lines of “just go make something awesome, maybe with mechs or something” he did not see this coming.

You can load the mech out with more ordnance than a Texas pick-up truck and you can also switch between three different mech bodies ranging from light to heavy that can drop different types of turrets. It’s enough to make a grown MechWarrior fan cry. Oh, and you’re fighting television sets in World War 1. Yeah, Double Fine does this a lot.

Metal Slug never encouraged you to murder your toaster while wearing a pink tutu and a Viking helmet and the world, as well as Metal Slug, was the poorer for it. And speaking of Metal Slug, when was the last time you played anything even remotely similar to it?

Enter the no-nonsense all-robot-murdering-action of the rather self explanatorily titled Shoot many robots, which brings Borderlands-style upgradeable weaponry and some nervous energy to a genre that’s been out of the limelight for way too long.

Geometry Wars wasn’t exactly old school, but it was so great at making people think it was that it imbued the entire twin-stick shooter genre with the same aura. And Gatling Gears wants to take its old school cred even further by throwing in some danmaku elements.

I don’t know if you can call two games a revival, but I’m sure glad to see mechs slipping back in designers’ good graces. Sometimes you just want to stomp around various locations ranging from the obligatory snow level to the ubiquitous city block in a death machine and if that’s a crime then you can lock me up right now.

Toy Soldiers is a regular nostalgia extravaganza and it got me pining for everything from Desert Strike to Panzer Commander in ten seconds flat. We’re not calling this a Tower Defense revival, because Tower Defense never went anywhere, but

Add to that the downright shameless but unspeakably brilliant idea of populating the new installment with 80’s toys and you get the GI Joe game we all wanted, needed and deserved instead of that horrible movie tie-in thing that will not be named.

This thing isn’t exactly oozing originality, but a visual style reminiscent of Homeworld and a Bionic Commando vibe to the mechanics have me intrigued.

It comes from a small indie studio made up of four of the guys behind the first three Halo games, so it’s hard not to expect big things, especially on the multiplayer side. Halo’s narrative element was also severely underrated and there’s a poignancy to the intro that’s worth a closer look.

These were our picks, but if you find any other upcoming gems out there that make you feel young again, let us know in the comments.