Or more likely, the announcement of an announcement and countdown to a countdown as these things go. The announcement was made on Larry Hryb’s Major Nelson blog and is captioned with the phrase “And it’s on…”, while the countdown is currently set to 158 days with E3 as the end date. 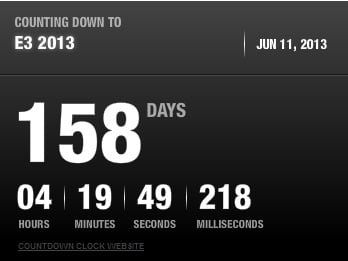 There’s a very real possibility that this announcement may pertain to the next Xbox, as the company is believed to be preparing for a 2014 foray into the next console generation. The next Xbox, or Durango as revealed by a developer tweet last year is still an unknown quantity, but is rumored to come with an integrated and upgraded Kinect.