There are times when you’re thinking about getting in touch with someone, but later finds out that you don’t have his/her email address.

Well, if you’re in a similar situation, you might be in luck. Google has announced improved integration with Google+, allowing users to contact other people on the social networking website from Gmail. This means that you’ll be able to send emails to Google+ users from your Gmail’s new message window. 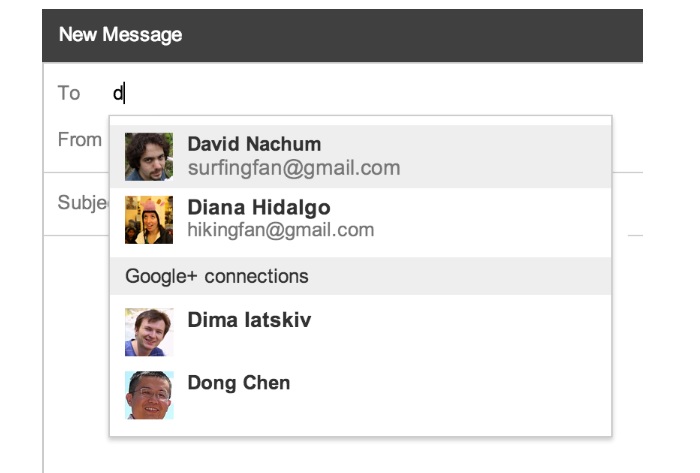 Have you ever started typing an email to someone only to realize halfway through the draft that you haven’t actually exchanged email addresses? If you are nodding your head ‘yes’ and already have a Google+ profile, then you’re in luck, because now it’s easier for people using Gmail and Google+ to connect over email. As an extension of some earlier improvements that keep Gmail contacts automatically up to date using Google+, Gmail will suggest your Google+ connections as recipients when you are composing a new email.

The good part is that your email address is not visible to Google+ users until you send them an email, and vice versa. Additionally, if you don’t want others to get in touch with you using this feature, you can disable this feature from Google+ settings as well.

Also, when someone in your circles send you an email, it will appear in the “Primary” tab in Gmail, while others will pop up in the Social tab.

The update is rolling out for all Gmail users, and once enabled, you’ll receive an email from the Gmail team with a link to the settings page from where you can confirm whether others can get in touch with you using this feature or not, along with more information.