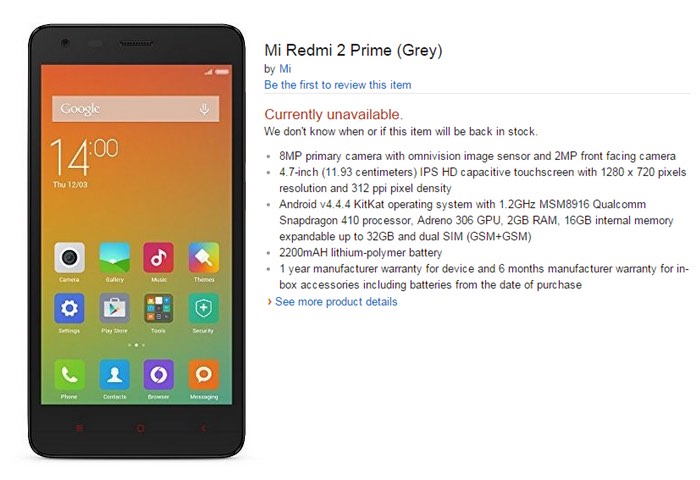 A new Xiaomi Redmi 2 Prime smartphone was spotted briefly on the Amazon website earlier today revealing the specifications. The new phone is expected to be officially launched on August 13th next week.

As you can see from the screenshot captured from the Amazon website, the new Xiaomi Redmi 2 Prime smartphone offers a slightly higher specification phone than the regular Redmi 2 and is equipped with a quad-core Snapdragon 410 processor supported by 2GB of RAM.

The Xiaomi Redmi 2 Prime is also fitted with a 4.7 inch 720p display and features a 2 megapixel front facing camera for video calling, together with a 8 megapixel rear facing for video and photographs. Xiaomi have fitted a 2,200mAh battery to the Redmi 2 Prime and pre-installed Android 4.4.4 with MIUI 6 on the device.

As soon as more information is made available next week during the August 13th announcement we will keep you updated as always on prices and availability. But the new Redmi 2 Prime phone is expected to launch in India ahead of a worldwide rollout.