Windows Phone 8.1 is expected to launch in less than a month, and we’ve seen some features being demonstrated in a video in the past few weeks.

Previously, we saw the highly rumored Cortana voice assistant as well as the action center on the Windows Phone 8.1. Now, the same folks at Unleash the Phones showed the WiFi Sense feature in action and demonstrated how it works in another video. 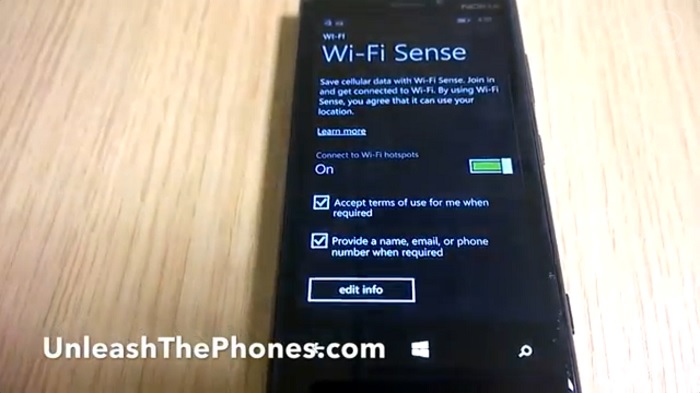 The WiFi Sense, when activated, will allow users to join public WiFi hotspots having to manually enter personal information such as the name or email, as well as the terms and condition acceptance. Now, WiFi Sense will take care of the “I agree to the T&C” message that pops up whenever you connect to a WiFi hotspot.

During the WiFi settings, it also shows the feature that give users the ability to automatically turn on the WiFi after a set duration, so users dont have to do it manually every time they come back from somewhere.

Here’s a video detailing the WiFi Sense feature in detail, and its settings window. Take a look at it.

Microsoft is expected to unveil the Windows Phone 8.1 in less than a month at the Build 2014 conference in San Francisco. We’ll update you as soon Microsoft make things officials with their latest OS.