Yesterday, Samsung Tomorrow teased of what users can expect from the Korean OEM at the Consumers Electronics Show 2014, which will take place in Las Vegas next week, and mentioned that customers can expect some innovative products at the show, possibly some wearable devices.

Now, Samsung Mobile UK posted an image showing a Galaxy Gear that was launched last year, and what’s next from the Korean OEM in 2014 with a caption, “What do you want Samsung to unveil in 2014?”

Well, there are quite a few possibilities of what Samsung could unveil at the event. We’ve heard rumors about the purported Samsung Galaxy Gear 2 from the past few weeks, and it was rumored to launch alongside Samsung Galaxy S5 at MWC 2014. There’s no official confirmation from Samsung, and we also doubt the company will release the sequel so early, despite it’s low popularity and lack of features. 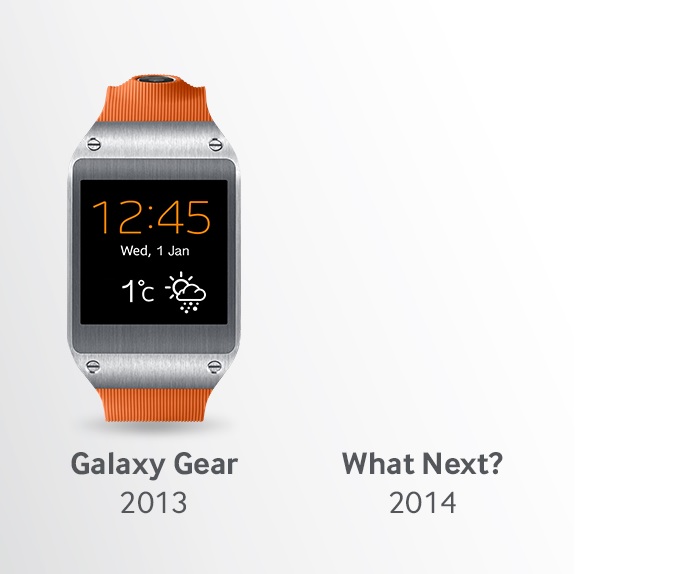 Although rumors do suggest that they are working on a health-and-fitness tracking device dubbed as Galaxy Band, which is rumored to make an official appearance at CES 2014.

Other than that, there are a few tablets we’ve seen in the past few weeks, including the highly rumored Galaxy Note Pro featuring a gigantic 12.2-inch display.

Well, these are all the things leaked by the rumor mill in the past few weeks. Now, you tell us, what do you want to see from Samsung in 2014?