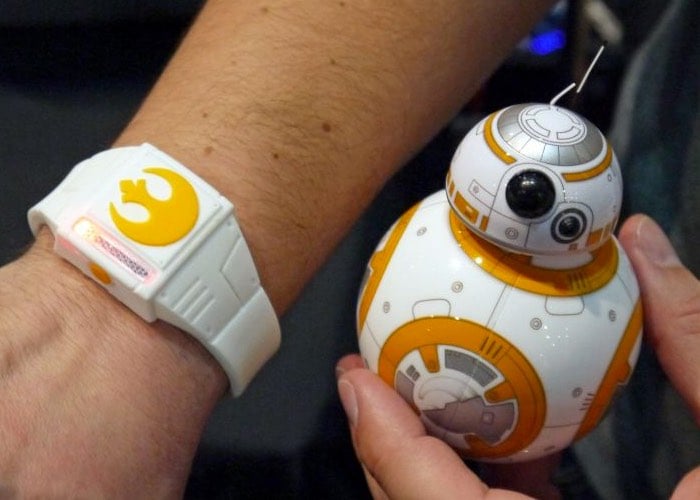 During CES 2016 this week, Sphero the creators of the Toy BB-8 Star Wars robot which is available to purchase priced at around $150, have unveiled a new way to control it using gesture controls, thanks to the new wearable Sphero Force Band.

The small BB-8 robot toy from the Star Wars: The Force Awakens movie is based on the technology that Sphero released a few years ago for its smartphone connected ball and provides a way for Star Wars fans to own their very own robot from the movie.

Check out the video below to learn more about the new Sphero Force Band that can be used to control the Star Wars Sphero BB-8 robot and see it in action.

Resting your hand to your side enters driving mode. With your palm down, Sphero looks away from you; with your palm up it looks toward you. Spin in place, and BB-8 spins with you. The direction also dictates where it drives, and the rolling speed is at least somewhat affected by your hand’s elevation. Waving your hand in place will enter a gesture mode — the only one that worked for me was a nod “yes” when we did a quick right jab — and then putting your hand back down re-engages driving mode.

For more information on the Sphero Star Wars Force Band jump over to the official website via the link below.