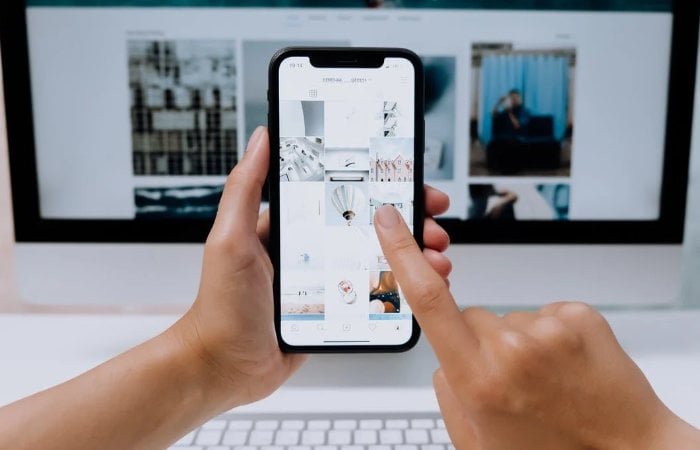 Apple AirPlay is a great screen mirroring iPhone app that is already available for free an integrated with Apple’s iOS operating system. It is supported by a wide variety of Apple devices as well as being supported by other hardware. So if you are looking for a quick way to share your iPhone screen with others or view movies, media or documents on a Samsung TV,  Roku device, Macbook, iPad, PC or other smart TV system from manufacturers such as LG, Sony and more this quick guide will help you use the screen mirroring iPhone app.

Once the AirPlay screen mirroring feature is connected you will be able to stream a video, share your photos or mirror exactly what is on your iPhone, iPad or Macbook screen in both portrait and landscape modes to your large screen TV or Mac computer, including the Apple iPhone, Apple TV, iMac, MacBook laptops, iPads, PCs and AirPlay 2 compatible smart TVs.

Before we start the screen mirroring on iPhone to your Samsung TV, PC or MacBooks it is definitely worth checking our the the every growing list of official AirPlay 2 enabled TVs located on the Apple website. If you’re uncertain whether your device will support the latest Airplay 2 features and screen mirroring iPhone technology created by Apple.

To set up screen mirroring on your iPhone you will first need to check that your iPhone, iPad or Mac is on the same wireless network as your Apple TV, Samsung TV, Roku, PC or AirPlay 2 compatible device. On the latest Apple iPhone devices such as the iPhone X or later, or iPads running iPadOS 13 or later, simply swipe down from the top right-hand corner to reveal the “Control Center” option panel as in the image below. You can see the iPhone “Screen Mirroring” button highlighted by the yellow rectangle, pressing this will reveal all the available and supported Airplay 2 devices on your wireless network. 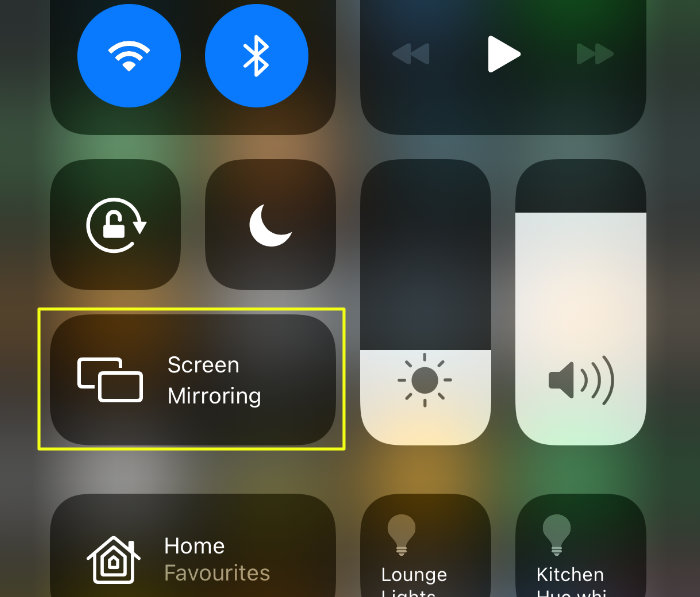 If your smart TV, PC or iOS devices not listed make sure that that it is also on the same wireless network as your iPhone. If they are and you are still having issues then you may need to visit the Apple support website for additional advice.

Mirroring your iPhone screen to Apple, smart and Samsung TV

Next select the Airplay 2 supported device you would like to mirror your iPhone screen to, as shown in the image below. If a pass code appears on your TV screen enter the pass code on your iOS device to make the connection semi-permanent. You will only need to enter the passcode the first time you make the connection, and it will be remembered the next time you would like to mirror the screen directly from your iPhone, iPad or Mac computer. 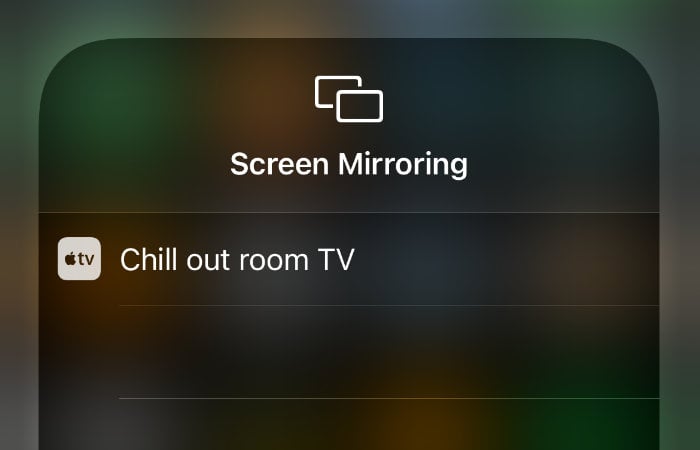 If the screen mirroring connection has worked correctly you will now see a direct mirror image of your iPhone display on your large screen TV. To stop iOS mirroring, once again open the “Control Center” settings page as pictured above and tap then tap the “Stop Mirroring” button on your screen or you can also press the Menu button on your Apple TV remote control if that is more convenient.

If preferred you can also stream video directly from your iPhone, iPad or iPod, Samsung TV and other devices directly to your Apple TV directly from within iOS applications. Once again check that both devices are on the same wireless network and your devices are both AirPlay 2 compatible. While watching a video in an app for instance, down in the bottom left-hand corner you will see a small rectangle with a triangle at the bottom which look similar to a TV screen. (The icon will be featured in any application that supports Airplay 2 Streaming).

By tapping the button you’ll then be presented with a list of compatible Airplay devices on your wireless network capable of accepting your stream, select one and you will see your content appear on your large TV screen or device and the logo will turn from white to blue. Be aware that not all applications support AirPlay, but you can always check whether an application is compatible by visiting the applications official Apple Store page for clarification.

To stop streaming simply tap the same (now blue) Airplay icon and streaming will stop and the icon will return to its original white color.

If you use AirPlay and screen mirroring  on iPhone quite regularly your phone might automatically stream video to your preferred Apple TV or AirPlay 2 compatible device automatically, i.e. the one you have been frequently connecting to. If this is the case you will see a blue connection icon in the top left corner on your iPhone screen as below. To terminate the connection simply tap the icon again or select another device from the list to stream or screen mirror directly to that from your iPhone. 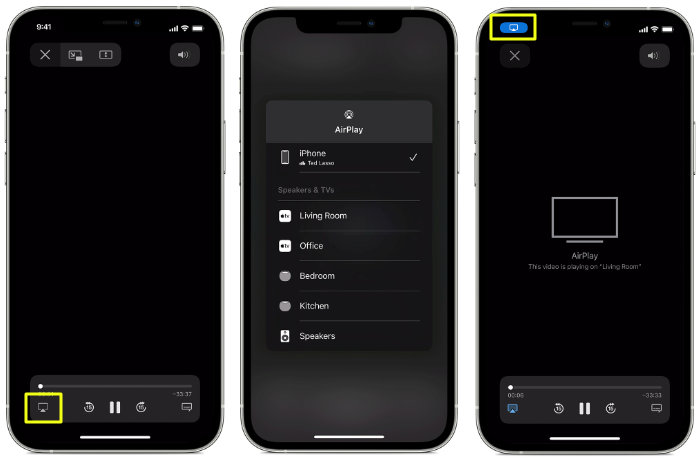 Devices you can stream to using the Airplay screen mirroring feature include, Apple TV 4K or Apple TV HD with tvOS 11.4 or later , HomePod with iOS 11.4 or later , Speakers connected to the Audio Out port on AirPort Express 802.11n (2nd Generation) with the latest firmware update as well as AirPlay 2 compatible smart TVs which feature the “Works with Apple AirPlay” certification. AS well as smart TVs from the likes of LG, Samsung, Sony and VIZIO. For a complete and up to date list of supported TVs visit the Apple support site. If you are interested in screen mirroring to your Samsung TV more information is available on the official Samsung Apple TV app allowing you to Watch Apple Original shows and movies from Apple TV+ on your Samsung Smart TV via the Samsung website.

The original generation of Airplay devices before the release of Airplay you can stream from include the following devices :  iPhone, iPad, or iPod touch, Mac , iTunes on Mac or PC and Apple TV 4K or Apple TV HD. Using Airplay 1 you can stream to HomePod, Apple TV 4K, Apple TV HD, and Apple TV (2nd or 3rd generation), speakers connected to the Audio Out port on AirPort Express and speakers certified with the “Works with Apple AirPlay” standard. This will be confirmed on your speakers packaging or in the instruction manual. To learn more about Airplay and troubleshooting issues when iPhone screen mirroring jump over to the official Apple support site.