The Samsung Galaxy Note 3 is rumored to be made official this week, Samsung are holding a press conference in London this Thursday, the 20th of June. If the handset is announced this week then we would expect it to go on sale in the US and Europe next month. 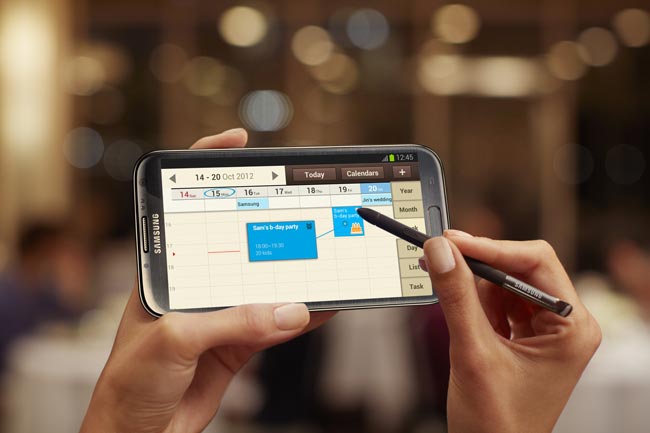 We are expecting the Samsung Galaxy Note 3 to be available with AT&T, T-Mobile, Sprint and Verizon in the US, in Europe the device is expected to launch with all the major carriers which would include Vodafone, EE, T-Mobile, Orange and Three.

There have been a number of rumors on the Galaxy Note 3 specifications, of course these have yet to be confirmed by Samsung, the device is rumored to feature a 5.99 inch full High Definition display with a resolution of 1920 x 1080 pixels.

Processing on the Samsung Galaxy Note 3 will be different depending on the market, in the US and Europe the device will come with a Qualcomm Snapdragon 800 processor, probably with a clock speed of around 2.3GHz.

The other processor that is rumored for the Galaxy Note 3 is Samsung’s new Exynos 5420 processor, at the moment we do not have many details about this processor, hopefully there should be some more information later in the week.

Other specifications on the Samsung Galaxy Note 3 will include Android 4.2.2 Jelly Bean, a choice of storage in the form of 16GB, 32GB and 64GB of built in storage, plus either 2GB or 3GB of RAM depending in the processor.

The Samsung Galaxy Note 3 will come with a 13 megapixel camera for photos and video, the camera is rumored to come with a number of different features, and the device will also feature a front facing camera for video calls, probably around 2 megapixels.

This new phablet from Samsung will be a flagship device and we are expecting it to come with a number of Samsung’s new features that were introduced with the Samsung Galaxy S4, these may include the company’s new eye tracking technology, Smart Pause and Smart Scroll which debuted in the S4.

We should have full details on the new Samsung Galaxy Note 3 this Thursday, along with the other new devices that Samsung will announce, one of those will be the Samsung Galaxy NX camera.