There have been rumors circulating all around the internet that Samsung is working on a smartwatch that is expected to launch at IFA in September. According to a new report, the alleged Samsung smartwatch has been spotted in the inventory system of the company. 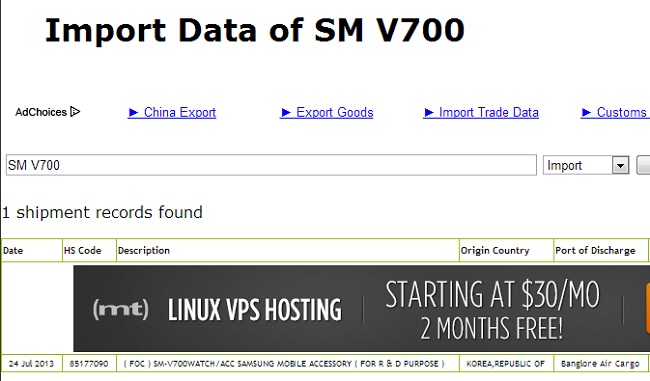 The device codenamed SM-700 is said to be the smartwatch. The list has appeared on Zauba that shows a mysterious device – expected to be Samsung Smartwatch – being shipped from Korea to Bangalore (India) for R&D purposes. According to the shipment details, three units of the alleged smartwatch have been shipped.

Some unidentified sources of SamMobile have also confirmed that Samsung Germany has also received a smartwatch prototype for testing purposes. It also mentions that no European country has received this prototype. This points out towards a possible launch of the device in Berlin at IFA 2013 that was rumored earlier.

Currently, we have not seen any picture or leak of how this mysterious smartwatch will look like, but by looking at the reports emerging from different sources, I hope we will see it pretty soon.