The alleged second generation Nexus 7 tablet is just a few days away. A number of leaks suggest that the device will hit the shelves at the end of this month, 31st July to be specific. Today, a new Best Buy ad has been leaked that is scheduled to run on 28th July, and it clearly mentions that the upcoming Nexus 7 tablet will be available “Next Tuesday”, that is 30th July.  It would just a week ahead of the 24 July event where the search engine giant is expected to launch the much awaited tablet. 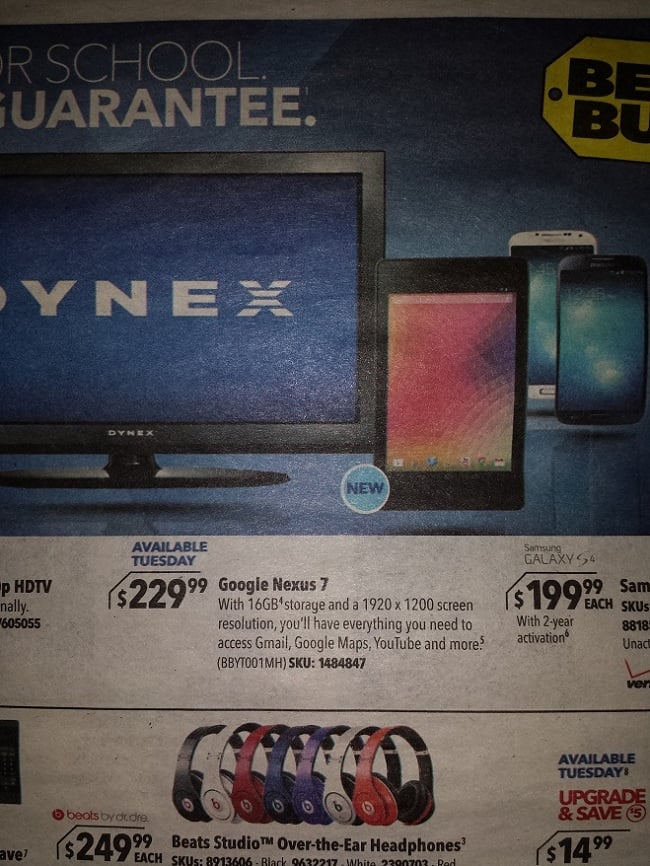 The advertisement also mentions some of the specifications and price of the upcoming tablet. If you take a closer look, it has been confirmed that the device will feature a 1920 x 1200 resolution and will cost $229 for the 16GB model. Other rumored features include a 1.5GHz quad-core processor, 4GB RAM, 5MP rear camera and 1.2MP front camera. On the software side, the device is expected to run Android 4.3 Jelly bean.

I simply cannot wait for the event. I hope it will be action packed with many new announcements including the launch of Android 4.3 Jelly Bean along with the Nexus 7 tablet. Are you excited? Will you buy the second generation Nexus 7? If the leaked specifications turn out to be true, I would definitely get this tablet.