The folks at AdDuplex have posted their latest report that gives us insight of how Windows Phone is doing in the competitive smartphone market.

Let’s get started with a few important things the report mentions. Nokia is still dominating the Windows Phone operating system with a market share of 92.6 percent while the remaining 7.4 percent is captured by other OEMs, which is not surprising at all. 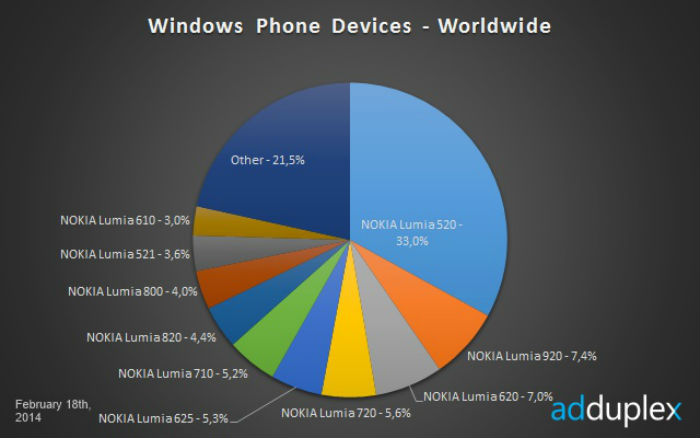 On the other hand, Nokia Lumia 520 is still the best-selling Windows Phone device with a market share of a whopping 33 percent when it comes to Windows Phone, followed by the Nokia Lumia 920, 620, aand 720. It turns out the latest high-end offering, the Lumia 1520, from the Finns is no where to be found in the worldwide numbers.

In the UK, Nokia Lumia 520 is still the most popular Windows Phone handset with a market share of over 40 percent followed by Lumia 625, which hints that low-end offerings are more popular in the region. Users may be getting it to get the taste of how Windows Phone operates before they decide to shell out amount for high-end Lumia 1520 or any other device. 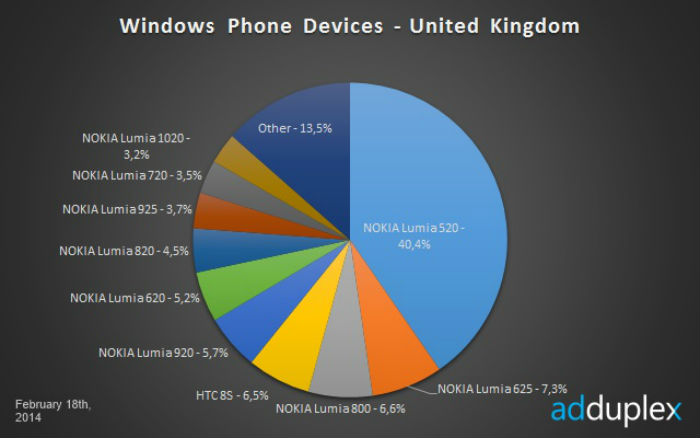 The same is observed in the US where Lumia 52x are holding the largest market share. And, oh, we can also spot Nokia Lumia 1020 in the list with a small 2.8 percent market share, with most of the device tied to AT&T, T-Mobile and Verizon.

It seems Windows Phone is slowly gaining popularity. Now it remains to be seen what features will be introduced in the upcoming Windows Phone 8.1, which is expected to launch in April at the Build conference. Can it help Windows Phone compete with iOS and Android?

Head over to the source link below to view the complete report.