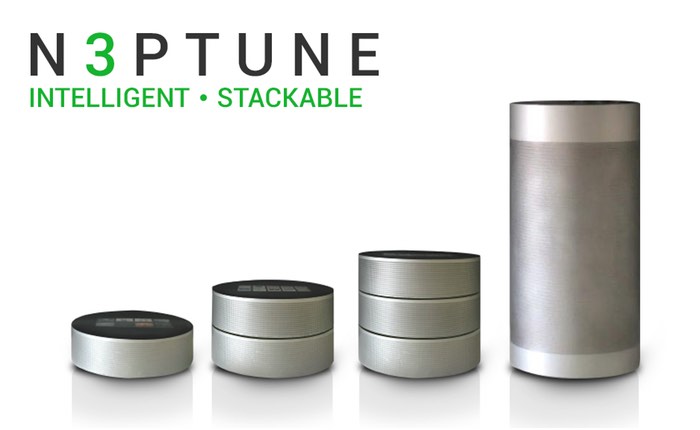 N3ptune Audio has unveiled a new stackable wireless speaker system that is equipped with a touchscreen interface and has been finished with a minimal design, that its developers say compliments any surface.

Watch the video below to learn more about this intelligent wireless speaker system aptly named the N3ptune, which is capable of providing 360 degree sound together with features such as support for Google Play and Bluetooth connectivity.

Features of the stacking wireless speaker system include :

– Google Play – With the convenience of having google play you can now have the ability to use a wireless speaker without needing a smartphone. simply download any app from the google play store and you can begin using it straight from the N3ptune speaker itself.

– Bluetooth – We integrated aptx codec to make bluetooth paring seamless and to output the clearest loudest sound possible when pairing a smartphone or outside source.

– Pair – Pair multiple N3ptune speakers together in different rooms to be in-sync with each other when playing the same song or just pair them and control them from one master speaker or phone app.

– Voice Activated – It’s like having a smart assistant with you at all times. Google Now lets you control N3ptune with voice which gives you the convenience of setting appointments, alarms or switching through songs without the need of touch.

– Internal Storage – N3ptune comes with 16GB internal storage which is enough to download your Spotify playlist straight to N3ptune or download 1000’s of apps from the Google Play Store.

– Wifi – N3ptune easily connects to your WiFi network to have a far greater connection range than bluetooth while also giving you the capability to use AirPlay.

– Touchscreen – N3ptunes touchscreen display makes this an all in one speaker by eliminating the need of a smartphone or outside component. You can download apps, pair speakers, set alarms, lower or increase volume all from the N3ptune speaker itself.

– 360 Degree Sound – By having 360 degree sound everyone in the room will have the same music experience. N3ptune can be placed in the middle of the room or any part of the room unlike regular wireless speakers that need to be placed in corners in order to achieve even sound for everyone.

– Stackable – N3ptunes stackable technology lets you stack as many as 8 speakers together to achieve higher levels of volume. Simply stack them together and N3tune speakers will automatically sync with each other to play the same song at the same volume.

The N3ptune stackable speaker range has this week launched via Kickstarter with the aim of raising $36,000 over the next 30 days. For full specifications and to make a pledge from $88 visit Kickstarter via the link below.