They’ll start selling for $19 a pop. Featuring every leading Star Wars character from the original trilogy, the new line of action figures is supposed to fire the enthusiasm of the tots. This lovely bit of news comes just weeks after Star Tours re-launched in Disney theme parks, a momentous event that came hand in hand with a momentous avalanche of exclusive merchandise. 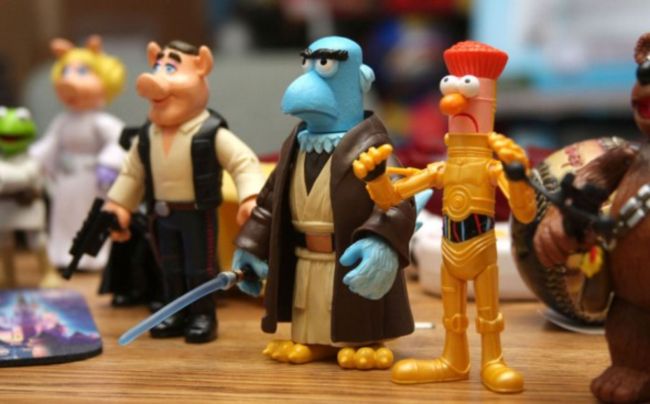 The other day while walking by Cody Hampton’s office, I saw something that made me return to my office and grab my camera. He wasn’t in his office at the time but I couldn’t resist the opportunity to take the picture shown above. Cody is the Associate Product Developer for Toys and Games and clearly he has a fun job (I mean who wouldn’t enjoy playing with toys all day?). He had just received the final production samples of action figures featuring The Muppets dressed as Star Wars characters. I later asked Cody about the figures which he meticulously lined up on his desk.