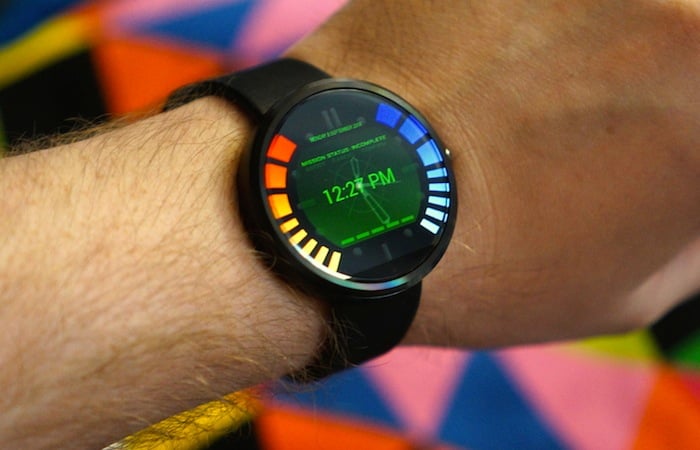 Last week Motorola officially launched their new Moto 360 smartwatch that will be heading to Verizon Wireless, and AT&T in the US and has already sold out over on the official website after going on sale priced at $250.

Now the industrious developer has already created a new user interface in the style of the 007 GoldelenEye watchface used in the iconic GoldenEye game for the Nintendo 64. Check it out in the video after the jump.

The new Motorola Moto 360 is equipped with a 1.56 inch backlit display offering a resolution of 320 x 290 pixels at 205 pixels per inch and is protected by Corning Gorilla Glass 2 and is expected to be priced at around £200 when it launches in the UK.

The Moto 360 is powered by a TI OMAP 3 processor supported by 512MB of RAM and includes 4GB of built in storage. The wearable wrist worn smartwatch connects to your smartphone or tablet using Bluetooth 4.0 LE technology and comes with Google’s new Android Wear operating system. Motorola explains:

“Moto 360 keeps you on time and up to date without taking you out of the moment or distracting you, telling you what you need to know before you know you need it through subtle alerts and notifications. With just a twist of the wrist you can see who’s emailing or calling, what time your next meeting is or a friend’s latest social post.”

Other features of the new smartwatch include a built in heart rate monitor and Pedometer. For more information on the new Moto 360 Smartwatch jump over to the official Moto 360 website for details.