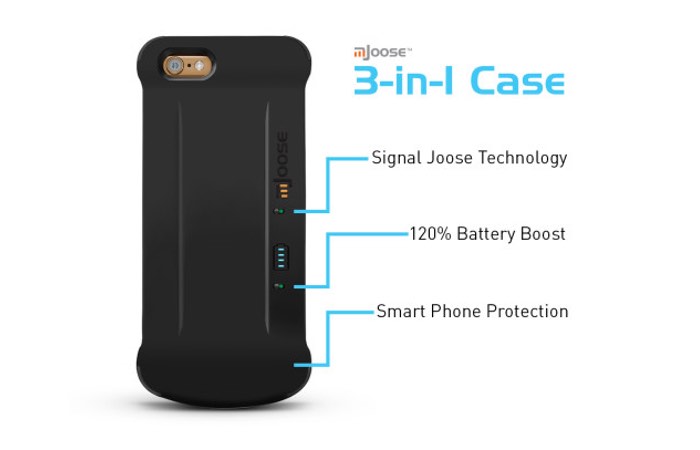 If you find your smart phone signal strength is a little poor in certain areas you frequent on a daily basis, you might be interested in a new battery smartphone case called the mJoose.

Which has been designed to not only provide enough juice to double your battery life but also boost your signal by 100 times say its developers. Once installed the mJoose smartphone case will also allow you to charge your smartphone twice as fast as before using fast charging technology.

Check out the promotional video below to learn more about the inspiration, design and functionality of the mJoose battery smartphone case which is taken to Indiegogo and is currently in the final hours of its crowdfunding campaign having raised over $72,000 in the process thanks to over 650 backers. The case supports iPhone 6/6S, 6 Plus/6S Plus, Galaxy s6 and Galaxy s6 Edge.

Its developers explain a little more about mJoose :

Unlike existing battery cases, the mJoose 3-in-1 Case includes cell signal amplification with patented micro-electronics that are so small they fit into the protective case. The multi-band (700-2100MHz) cell signal amplifier will improve your iPhone or Galaxy signal strength wherever you go. mJoose has an integrated 3000 mAh battery that will fully charge your battery for up to 14 hours of additional talking time. The mJoose case also charges twice as fast as traditional charging!

For more information and to maintain pledge jump over to the Indiegogo website via the link below, pledges start from $99 for a battery smartphone case for Apple’s latest iPhone devices.